My Birthday Gift to You

That’s right, today marks one more orbit around the sun for me. I’ve been hitting it hard on the promotional front, and am about out of paranormal stories to push. Will O’ the Wisp is on an extensive blog tour, but that doesn’t leave much to do around here.

That means I need to stretch a bit to fit this into the Halloween theme. It’s actually an epic fantasy, but it contains lots of things that could be considered monsters. (If you look at them with your peripheral vision.) 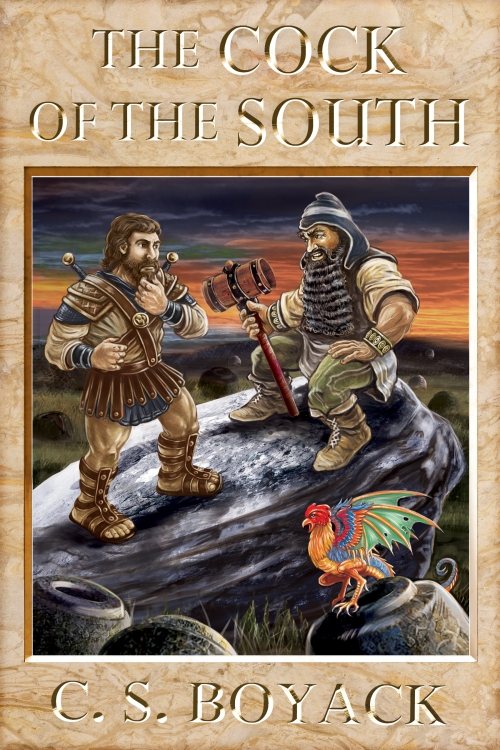 Regular followers know I like to mash things up. This is a Greco-Roman fantasy with some of the traditional Germanic characters thrown in too. Elves, dwarves, and goblins are European in nature, so I decided they must have existed further south too.

They are in the mix with cyclops, satyrs, Amazons, and centaurs. In this world, Remus killed Romulus and the Remsians are the power instead of the Romans.

This is the story of Cobby, a Southern Dwarf. He loses his human family in an attack by some people who look suspiciously like Atlanteans. This sends him on a journey to discover his true heritage. He meets other downtrodden races along the way and seems to collect them all. Eventually it becomes a sizeable band.

It’s like Homer included Exodus in some kind of, well, mashup. I think it’s a fun story, and for my birthday it’s absolutely free. One day only. Hope you enjoy it.

This is one of Lisa’s paper doll outfits. You can download your own under the Look Free Stuff page up at the top of this site.

You can get your free copy of The Cock of the South at this link. (LINK)

I don’t know what time Amazon starts these things, and the international date line may come into play in your location.

Update: One of my followers said the link didn’t work for him. I used the universal link generator, but he suggested this alternate https://www.amazon.com/Cock-South-C-S-Boyack-ebook/dp/B00P4H37WC

For all you fantasy fanatics

nce upon a time, the whole European landmass was covered by more people than humans.

Centaurs roamed the open forests. Cyclops lived a tribal lifestyle in the deeper forests. Humans mingled with these races, but it wasn’t always a happy existence. Humans expanded their cities, and forced many of these races out. Some of the human women formed bands of their own called Amazons.

They are all gone now; only the humans remain. A brilliant researcher, named Boyack, combed through ancient pottery shards and scrolls and discovered bits and pieces of their story. The stories always led back to a Southern Dwarf who may have been named Paulus Atrius. Most of the texts refer to him simply as Cobby.

Boyack aggregated these bits and pieces into a story he called, The Cock of the South. This story tells the tale of these other peoples, before man took completely over.

Let’s look at what the reviewers are saying:

Set in the Roman-Greco era, even this has a twist. Boyack is a master at turning everything on its head with that infamous ‘but what if’ question. Cobby is a southern dwarf brought up by humans to be totally unaware of his true heritage, although it is evident to everyone else. When disaster strikes, he sets out on a journey to find the truth. His fair-mindedness, ingenuity and cunning soon have peoples of all races flocking to him as their leader, leading him to a conclusion he could never have anticipated.

5 stars The Cock of the South

It’s a mix of fantasy and mythology in a world where Remus killed Romulus, and Remsians, rather than Romans rule the world. Cobby, brought up among the Remsians, doesn’t realize he’s actually a dwarf. Little by little this gentle being, who gives everyone a chance to prove themselves, is forced to into a role of leadership. The book is entertaining, humorous, and exciting, with epic battles fantasy fans look forward to. But it also sends a clear message about biases and bigotry learned from our upbringing, and how we should all be able to get along.

5 stars Wonderful story that will hook you!

I love Roman and Greek mythology, but find it hard to read fictional pieces, this novel was different. Within the first few pages I was hooked. I found myself stay up until 2AM reading, I just couldn’t put the book down. I finished the novel in 4 days. I’m super excited to read more from C.S. Boyack.

This book was full of adventure and kept you turning the pages. A very smart and resourceful fellow and he holds your interest all the way through the story. You learn why he becomes known as The Cock of the South. If you enjoy fantasy you will enjoy this book. I certainly did. I’m a fan of Dwarfs left over from The Lord of the Rings and The Hobbit.

Ran into this after following a link on a blog, bought it on a whim, not sure what to expect. Great, entertaining read, though! Highly recommend.

I really tried to take a new spin through Dwarven fantasy. I placed it in Southern Europe in a Greco-Roman environment. I also mashed up some of the traditional Nordic legends with Greco-Roman mythology. I’m excited about this story, and the reviewers all seemed to like it too. I’d appreciate it if you would give it a chance too.

Here is the buy link: The Cock of the South.

Tagged as bust, centaur, cyclops, dwarves, fantasy, reviews, The Cock of the South