The Bow of Hart Saga

I’m thrilled to have P. H. Solomon over today. He’s been here before, but it’s been a long while. I thoroughly enjoyed The Bow of Destiny, and I’ll bet you would too. I’ll let P. H. tell you about his works and what offers he has this week.

Hello to everyone and thanks to Craig for hosting me today. I’m P. H. Solomon and I’m a fantasy author, living in greater Birmingham, AL. It’s great to be a part of Story Empire and be on the Roadshow this week. I hope you’ll enjoy all the stops and authors this week and look at our books. To see our schedule and information about our prizes, please click to our Roadshow page and see where we are making appearances each day. This week I’m giving away a $10 Amazon Gift Card to the most active commenter. 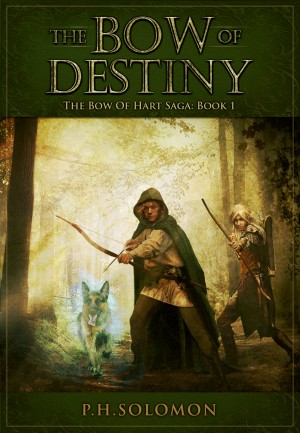 As I mentioned yesterday, The Bow of Hart Saga is the culmination of several decades of development through several different versions. One of the main points of that development was that the original book was named An Arrow Against the Wind which is now actually the second book due out later this month. When I rebooted this series several years ago, I decided several things about the original one needed heavy revision which meant that the book needed to be split into two books. That meant re-developing the book into two separate books that birthed The Bow of Destiny.

One of the other decisions I made meant facing the quality of my previous effort. It was at best out of date with current style for fantasy and, therefore, not very good writing. I faced this squarely and started learning better ways to develop and write the series. Because of that, I landed on using deep point-of-view and dialogue in context of character actions. But more than that, I had to learn to improve the characterization.

The result was The Bow of Destiny which was been pretty well-received to this point. It has sold in the thousands and was chosen as the 2016 Book of the Year by the fantasy review site, Fantasia Reviews. It’s also garnered some other attention that has started opening more doors for the series and other projects – but these are still in the works so I can’t detail them just yet.

However, as several of my recent commentary posts (commentary part 1 & part 2) have discussed, the book opens with a rather difficult character in a confusing situation. How I landed on this opening took a long time but ended up being rather daring because I’m asking the reader to get very close to Athson very quickly – so close that you get rather confused along with him. That’s something with which some readers have struggled but to which many others have responded very favorably. So I came up with a challenging character in a challenging situation and worked to get him moving into the adventure in ways that continually grind on him to the very end. It became a very deeply personal tale for Athson and I hope it’s one that takes readers down his path of struggle. The blurb states the premise of the book very well:

Haunted by his past. Hunted in the present. Uncertain what is real.

Athson has seen things that aren’t there and suffered fits since being tragically orphaned as a child at the hands of trolls and Corgren the wizard. When a strange will mentioning a mysterious bow comes into his possession, he’s not sure it’s real. But the trolls that soon pursue him are all too real and dangerous. And what’s worse, these raiders serve Corgren and his master, the hidden dragon, Magdronu, who are responsible for the destruction of his childhood home. Athson is drawn into a quest for the concealed Bow of Hart by the mystic Withling, Hastra, but Athson isn’t always sure what’s real and who his enemies are. With Corgren and Magdronu involved, Athson must face not only frequent danger but his grasp on reality and the reasons behind his tragic past. 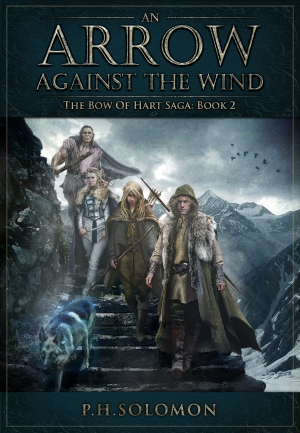 The rest of the series twists along the opening theme toward an epic fantasy ending. Look for An Arrow Against the Wind to take Athson through even more personal challenges as he seeks to resolve the myriad situations in which he finds himself as he seek the Bow of Hart. But I’ll share some of that tomorrow.

Do you like discovering new indie authors? Do you like to wait to read an author until you see more reviews? Thanks for reading this post today and be sure to check out our schedule. While you’re here, feel free to have a look at my current book, The Bow of Destiny and the upcoming release of An Arrow Against the Wind.

You can click on my bio banner below to pay me a visit at my website and learn more about me and the rest of The Bow of Hart Saga. Please follow me all week as I share more about my writing each day.

Here are some of the places where you can catch up with me on social media:

Here are some free novellas that relate to The Bow of Hart Saga:

50 responses to “The Bow of Hart Saga”