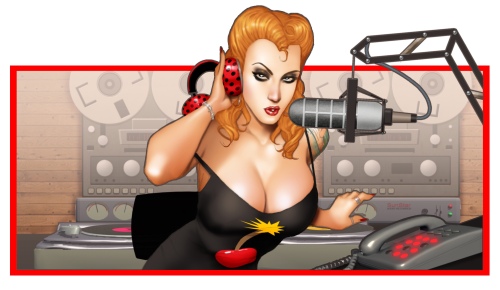 Welcome all you abandoned children and lost boys, you forgotten souls of every stripe. You’ve landed on Lisa Burton Radio, the only show that brings you interviews with characters from the books you love. My guest today is Michael St. Germain. “Welcome to the show, Michael.”

“You have a bit of an unusual heritage. Can you tell our listeners about that, please?”

“Certainly. I am very proud of my heritage though my dad was not. My grandfather

was Augustus Saint-Gaudens, the most famous sculptor in the 19th and early 20th century here

in America. Do you know the name Augustus Saint-Gaudens?”

“No, I don’t. But you see I do not know anything about art and sculptures, except the Mona Lisa with her pretty smile and the statue of David, which is so sexy.”

“Yes, those are two beautiful pieces of art. But, getting back to my grandfather, he was

very famous doing such monuments as The Shaw Memorial in Boston, the Sherman Monument in New York City, the Amor Caritas in Paris, hundreds of reliefs and cameos for the rich and famous, and the $20 gold piece for which he is most well-known.

“You are like many people who know Rodin, but not Saint-Gaudens and that is because Rodin brought a whole new concept of sculpture at the same time my grandfather was revolutionizing the more traditional forms of sculpture.

“Well, enough about that. Saint-Gaudens was married and yet fell in love with one of his models, Davida. She was his mistress for over twenty-five years and my grandmother. They had one child, Louis Paul Clark who was my father. He was born out of wedlock in 1890 right in the middle of the Victorian Age. ”

“Was Louis kind of bitter about his father not claiming him?”

“My dad never forgave his father for not marrying, Davida. Saint-Gaudens chose to not risk his rising career by getting a divorce and marrying his mistress. Remember this was during the very moralistic Victorian era. My dad suffered all his life because of being called a bastard when he was growing up and hearing his mother be called names. When my grandfather came to their home it was always short visits and most of the attention was on himself and his work. He was really not a father in the true sense of the word. Dad never talked about his mother or father. He never made friends because he did not want anyone to know about his past.”

“Just brainstorming here, but is it possible that Louis didn’t know how to be a good father, because he didn’t have one as an example?”

“Now don’t start with a lot of psychological mumbo-jumbo on me. I do not believe in all

that nonsense. My dad was a true gentleman. I loved him, but I just never seemed to have him understand me. The man I truly loved and looked up to was Uncle Leon. In fact, he was more of a father to me than my dad.”

“With the comparison between two men, did that give you any idea of what kind of man you wanted to become?”

“Well, Dad was very strict. When I was just a little kid, maybe 3 or 4 years old, he told me not to put my elbows on the table! Even now, I think how stupid that is. Maybe that is where I began to be a rebel always challenging the so-called rules of society and schools.

“Now, Uncle Leon he taught me the rules and how to behave. I lived with him and Aunt Helen when my mother was pregnant with each of my brothers. He never punished me like my dad did. He had a way to teach manners and good behavior.

“My dad was pretty serious and quiet. Everyone liked him, but he did not let anyone except my mother get close to him. He worked hard when he owned an orange grove and then later he ran a hospital that my aunt had started.

“Uncle Leon was talkative and laughed a lot. He was very religious and faithfully read the Bible every day. He worked hard on his farm too, but then he suddenly died when I was 11. It was the saddest day of my life.

“My mother and aunts talked about it was God’s will and how he was now in a better place. That is just a bunch of nonsense. I have never believed in any God. If there was a God he would not take the life of someone like my uncle at such a young age and let bad people live long lives. My dad was not a believer either so we at least had that in common. He was a good man, but growing up really without a father and the circumstances of his childhood left him with deep scars. He deeply loved his mother, Davida as well as my mother. I sometimes wonder how much he loved anyone else. Well, he was very close to my brother, Richard who was killed in the war. After he died, we were never allowed to say his name again.”

“With that background, what philosophy toward raising your own children did you use?”

“I didn’t see much of my daughters because my first wife, Helen and I divorced when the girls were 5 and 2. They lived in Long Beach and I was 100 miles south in San Diego. Helen always accused me of spoiling the girls, but I think she was too harsh with them. She would punish them with a spanking or worse yet, switching their bare legs. Maybe I didn’t spend much time with them, but we always had fun and I never spanked them. I tried to teach them about manners and good behavior by just talking to them. I guess I tried to be like Uncle Leon.

Part of the problem was that I didn’t see them often. When I got them for a month each summer and a week at Christmas they would stay with my parents because I just had a small apartment or lived on a boat. Neither was good for the girls. I went to my parents as often as I could to see my daughters.”

“You certainly had some bumps in your road. My bio says you were born Murray Clark. How did you wind up taking the name Michael St. Germain?”

“Well, I had to leave California for personal reasons, which I am not going to discuss here. I didn’t even tell my daughters where I was for almost a year. I legally changed my name after moving across the country. I chose St. Germain because it was similar to Saint-Gaudens. I chose Michael because that is the name I would have given if I had ever had a son. It turns out one of my grandson’s name is Michael so I just tell people he was named after me. Actually, he was born four years after I changed my name, but people do not know that.”

“I get it. I keep a bug-out bag in my room to this day. You never know when your past will catch up with you. So Florida was a chance to become a new person. Nobody knew you there. Did you find some peace there?”

“You ask if I found peace. I am not sure what peace is. I’ll tell you what my motto has been for most of my life: People are no damned good. I tried to start a new life in Florida. I didn’t know anyone, I was almost penniless, but I took any job I could, and later made some investments in rental properties. I met a woman who really seemed to understand me. Her name was Gladys and we got along pretty good, but then she suddenly died. You know they say the good die young. Gladys and my brother Richard were both good people and died young. Gladys encouraged me to reconcile with my oldest daughter, which I finally did a few years later and I am at peace with her.

“Where I live now is a very peaceful place sitting on a big lake. I have a boat which I truly love and there is a heron who sits on my dock everyday as if he was mine. There are days when I reflect back on my life: how my dad did the best he could; that I did the best I could being a father; how much I loved Uncle Leon; and the four marriages and the many women I had relationships with. I could have done more with my life if I had made better choices, but probably everybody could say the same.”

“Michael, I appreciate you being on the show today. Any last thoughts for our listeners?”

“No, I have talked more to you than I have ever talked to anyone, except my one true love, Grace. She was a good listener and did not judge me. Ms. Burton, you have not judged me for which I am grateful. You only listened and asked some challenging questions. Thank you for having me here today.”

“You can learn all about Michael in the book, Novy’s Son, by Karen Ingalls. I’ll post everything you need on the website after I go off the air.

“Don’t forget to tip your waitress, by using those sharing buttons today. Facebook and Twitter have been know to sell a book or two. I’m sure Karen and Michael would do it for you, when your character appears on the next Lisa Burton Radio.” 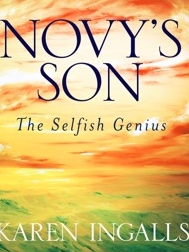 Novy’s Son follows the life of Michael St. Germain (aka Murray Clark), whose father did not know how to be a parent. Therefore, Michael lives a troubled life of alcohol, womanizing, and rebellion against society and the church. Growing up he did not receive what is referred to as the Iron John, based on Robert Bly’s best-selling book. Sons in particular need a strong, loving, and understanding father or male role-model, so they might learn how to be a father themselves someday. 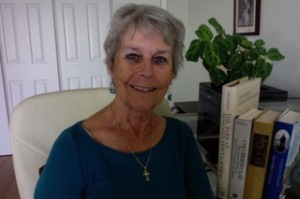 Karen Ingalls is the author of three published books, two blogs, and a public speaker. She is the youngest daughter of Michael St. Germain and wrote Novy’s Son in order that men might realize their important and vital role as fathers.

Ms. Ingalls is a retired RN with a Master’s Degree in Psychology and Human Development. She is a ten-year survivor of ovarian cancer and serves on two committees for a pharmaceutical company as an advocate.

She lives in Florida enjoying the same lake that her father did, watching the heron also come to the dock every day. She plays golf, involved with Women for Hospice, and is an active member of Rave Reviews Book Club and Rave Writers International Society of Authors.

All proceeds from each of her books goes to gynecologic cancer research.