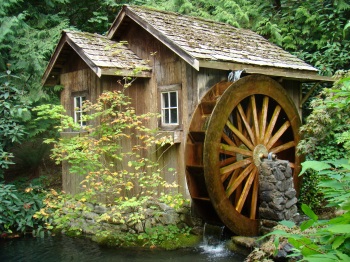 The Idea Mill posts are based off of cool things I find online. I have some push feeds that send me data that I'm interested in. This saves me time in endlessly surfing for these things.

They aren't all gems, and I comb through them pretty fast most days. When I find something cool, I save it in a file to make these posts.

These things are great for speculative authors like me. Sometimes an idea can drive a whole story. Other times, they become interesting elements inside a different story. I can't use all of them, so I share them here. Even if we pick the same things, our stories will come out differently.

The first story is an archeological find from England. This tiny piece of shale is about the size and shape of a guitar pick. There is a hole drilled through it, and it looks like it could have been worn as a necklace of some kind.

The interesting part is a sequence of grooves and divots that look like they were made on purpose. Scientists think it could represent a tree, a leaf, or even a tally of some kind. I think the best suggestion was a map. Check it out for yourself here. What if the owner had to hold it up against the sky? When the marks lined up with some geological points, like islands or peaks, they were standing over the treasure. How about if the marks lined up with stars? When you're in the right spot, looking through the the hole would show you the star where the mothership calls home. Could the length of cord tied through the hole be important? You have to hold it exactly that far from your eye, or you'll dig in the wrong place.

The next one was all over the Internet recently. You may have seen it. It involves a colorblind artist who implanted an antenna into his own skull. The antenna holds a camera that recognizes colors, and converts them into specific vibrations. Different color equals different frequency. He still can't see colors, but he can hear them now. Here is a link to the article.

My regulars know I created a rough outline for a science fiction story last summer called Grinders. Grinders are people who experiment on themselves. Think Dr. Jeckyll stuff here. This is exactly the kind of thing the grinders do. Maybe you want a story about trying to get something similar FDA approved to help people. It could still be pretty dramatic. What if the guy adjusted it to detect micro expressions instead. He'd almost be a human lie detector with the right programming. You could have him get kidnapped and forced to work for some black ops organization. Why not smells, or even pheromones?

Finally, we have some more stem cell research. There are some places in the body that cannot repair themselves. It appears the damage from a heart attack is one of those places. Attempts to use stem cell seeding haven't worked out, until now. Someone figured out a way to freeze the stem cells at a specific growth point, and in my mind, reprogram them. It appears we may be able to repair the damage from heart attacks very soon. You can read the article here. How far away can repairing brain damage be?

This looks like a good chance to write one of those pioneering medical patient stories. I still remember the retired dentist who received the first mechanical heart. This happened in Utah, and that was the news we got in Nevada. It was on television every night. I'm not going to Google it, but I believe his name was Dr. Barney Clark.

It could also be the way to screw things up and create your own superhero or super villain. All you need is something to contaminate the process along the way. Maybe it's a virus and you create a CDC medical thriller/horror story.

These are cool articles this time. Part of these posts involves me laying out a corny story using all these elements. I write this bit on the fly, so let's see where it goes:

Our hero is navigating across the wilderness to find a CDC refuge area. The cities are much too dangerous, because of the canabalistic mutants left in the wake of the disease. An attempt to create a cure for those with severe head trauma got contaminated by the Zika virus. Everything collapsed and a few holdouts are mankind's only hope.

He reaches the coast, and holds up the pendant his mother gave him. A sequence of scratches carved into a piece of aluminum can. The islands all line up, and a different island is visible through the hole in the pendant. All he has to do is steal a boat, and deliver his mother's last bit of research.

That's when his pursuer attacks. The man works for the research lab that caused the outbreak, and is also looking for the refugees. He's been tracking our hero using implanted antennae to see into the infrared spectrum, and follow his scent. It's fight or flight time, what would you write? (Actually, that one isn't too bad compared to the corny stuff in past attempts.)

How about it authors? Would any of these items enhance your speculative fiction?