Some new words, some chores too

Today was my flex day. I was looking forward to getting some new words down, and I managed that to a degree. It feels slightly over 1000 words, so it isn’t much.

This time I worked on Serang. What I wanted to happen was for her to fall in with a gang of thieves. It started out with her master being bitten by a camel spider. 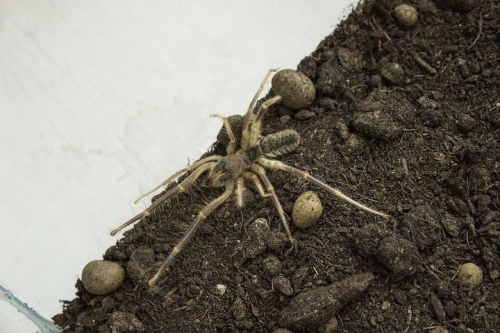 These are hideous beasts with long pointy jaws. They live all over the world, and I even killed one in my home when I lived in Nevada. People there call them air scorpions. Most of them aren’t hairy like this photo, and they’re a disgusting smooth nude color. This was the free-use photo I could find.

A bit of research revealed they are not actually poisonous to humans, but they are believed to be by the common people. I decided since this is a fantasy world, they’ll be venomous if I say so and went with it. They can also be as big or small as I want.

This also led me down a path involving a city at the beginning of a trade route. The country of Di Guo Quishi is a fantasy version of China, so think about the Silk Road here.

The Emperor has taken most of the men for his war. Many of the normal jobs are held by women or even children. How might the goods be exchanged, purchased, stored? How might the money flow? What kind of goods might flow into the west?

Most of these things involve one line or word, but I like to put the thought into them.

After this leg of the journey, they’re going to continue with their little quest by joining a caravan. I needed someone from the western world who will lead them. I decided since Don Velasco (From Lanternfish) was the fourth son in his family, I had one Velasco son to spare. (The eldest inherits the estate, the second gets a military appointment.) Everyone else had to fend for himself. This third Velasco son is the captain of a caravan heading back to his country.

This city has an active thieves market, and young Serang is kind of judgmental about it all. Eventually, if she’s going to become a pirate, she has to make an adjustment.

Unfortunately, I never got to the thievery part. I had chores to do. I have a hunch it’s going to turn into a massacre, but haven’t decided yet.

I ran into town and got my truck sniffed for emissions. It passed, but killed an hour of my day. When I got home, I had just enough time to schedule Lisa Burton Radio for tomorrow. Then I had a deviled ham sandwich.

Please come back tomorrow and check out the Fondant Lion. He’s pretty cute, and I think you’ll like the book he’s in too.

Today, Frankie helped me write. I may have gotten more done without her, but she’s hard to resist.