Welcome to another edition of Lisa Burton Radio. I’m your host, Lisa the robot girl, and I’m excited to be on the air in this time of national crisis.

Many of us are sequestered away right now, and that leaves room for a bit of reflection. I think we can all form an idea of what that’s like. Which brings me to my special guest today. “Welcome to the show, Jonah.”

“Hi, Lisa. Thanks for inviting me.”

“My bio says you’re alone on an island somewhere. To be honest, that sounds like a dream come true to many people. What can you tell us about that?”

“Oh, yeah, dream come true. Let me tell you about that. It’s anything but a paradise. The whole island is covered with tangled brush with thorns and stinging nettles. And that doesn’t even include the poisonous flowers that burn the skin horribly. But the monsters that inhabit this godforsaken place are the worse. They have long red fangs that glow and claws like that of a giant eagle. They threaten me at every turn. On top of the horrific dangers, the only food I can scrounge to eat is muddy fish and bugs.”

“I suppose most of us don’t think about the downside of being stranded like that. In our minds it’s all sunny beaches and coconut drinks. How did you wind up in such a place?”

“I lived on the streets for many years once I escaped from the orphanage. The city was huge, but I had a turf and controlled it with iron fists. Everyone who knew me feared the Wrath of Jonah. But, then I got arrested and convicted of my crimes. They gave me a choice. I could either be locked in a cement box beneath the ground or be exiled to this island. I chose the island. In hindsight, imprisonment might have been easier. Let me tell you more about the creatures. I was terrified of them at first. But I soon discovered a secret. You see, when they dropped me off on this island, they gave me a dagger and a few meager supplies. After the creatures had me cornered, and I couldn’t run anymore, I turned and prepared to die. I screamed at the top of my lungs and lunged toward them with the dagger drawn hoping I could take out at least one of them. To my surprise, they backed down and slunk back into the brush. After that, I try to keep my dagger handy at all times.

“But let me tell you about something else that just happened. I’ve been keeping track of the days I’ve been on this island for thirty-one days. Just this morning, I awoke to a loud thud outside my hut. Imagine my surprise when I poked my head out and found a package. I looked all around and could not see anyone or any means of it getting there.”

“Oh my God, someone has to be watching you. Don’t leave us hanging here, what was in the box?”

“Yeah, pretty creepy, huh? It was a burlap wrapped package and inside I was thrilled first of all, to find a package of dried Buffalo. I couldn’t wait to tear into that. It was really good. Then there were a few hygiene items, two books, a pencil and a note. One of the books was “The Four Agreements” and the other was a blank journal. Let me read you the note because it’s very puzzling. ‘There is only one way off this island. You must examine yourself, face your truths and make peace with your demons.’ Now, what do you make of that?”

“This sounds like one of those escape rooms. You know, where people pay money to solve the puzzle so they can escape. It’s fun.”

“Nothing fun about this. And, there’s more and perhaps the strangest of all. I heard footsteps outside my hut and was sure my imagination had gotten in overdrive. After all, I was alone and hadn’t seen any sign of another human since they dropped me off. But, then I heard it again and lunged out of my hut prepared to fight. Imagine my surprise when I saw a young boy around twelve standing there.”

“You mean there’s someone else stranded there, too? That was a lucky stroke.”

“Well, that’s just it. Titus isn’t stranded. He tells me he lives on the other side of the island where everything is lush and beautiful, but when he tried to take me through the portal to his home, legions of green slimy snakes blocked my way. He seems to be able to come and go, but I am not allowed to follow. So, he brings me fresh fruits and vegetables from his place. You can’t imagine how amazing that is. But, there’s something strange about this kid. He has some kind of magic. Webbing grows between his long fingers and he has luminescent green eyes that glow in a strange way. But, he’s a good kid and he’s helping me in lots of ways. He told me that his mother died, and his father disappeared. It seems that his father is a Wizard. When he tried to tell me about his father, a huge storm blew in and totally destroyed my hut. I grabbed my stuff and threw it into a duffel bag and pulled Titus along with me. He was in some kind of a trance. Finally, he snapped out of it and held a huge Amethyst Crystal up to his forehead and chanted some words. The storm immediately stopped.”

“That’s terrible, but at least you had each other to get through it all.”

“I suppose so. For the first time in my life, I felt the urge to protect someone other than myself. So, we made our way back to where my hut had been and to my surprise, there stood in its place a bigger and sturdier built shelter. And there is another package lying beside the door. Inside this package was another book, ‘The Dark Side of the Light Chasers,’ and another note that simply said, ‘Because you cared for someone other than yourself.’ The other weird part about the whole thing is that the ground that was covered in torrential rain a few minutes earlier was hard as a rock and dry. So, now I’m working my way through this book. Titus comes and goes, and I never know when he will appear, but we’ve grown close. I can’t imagine how all of this is going to end, but for the first time since I arrived here, I don’t scan the horizon every day for a boat coming to take me back home.”

“Oh, Jonah, this sounds like some kind of weird rehabilitation program to me. Dangerous and with no defined ending, but the reward kind of feels like a positive step. I hope you complete the program and can get back to your loved ones soon.”

“I have no loved ones to return to, Lisa. My mom was killed when I was very young. When I think about going back to my old turf, I know that I can’t be the same way I was before.”

“ So sorry to hear about your mother. I know I speak for all of our listeners today in wishing you the best of luck escaping from the island. Any last thoughts before we go off the air?”

“Maybe I don’t even want to go back to the mainland anymore. As long as Titus is here and my living conditions are better, I can be content. But I crave the magic that Titus has. Who knows? One day, he may be allowed to teach it to me. I’d like that. In the meantime, I’m going to make the best of the situation.”

“You can read all about Jonah and Titus in the book, Jonah, by Jan Sikes. I’ll post all the pertinents on the website after I go off the air.

“Don’t forget to use those sharing buttons today. I know Jan and Jonah would do it for you, when your character appears on the next Lisa Burton Radio.” 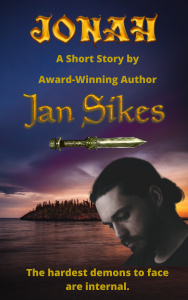 Fantasy meets reality when a young man is forced to choose his punishment for crimes committed. Jonah must decide between imprisonment in a concrete box beneath the earth or be exiled to a deserted, barren island. He chooses the island, but nothing can prepare him for the deadly creatures, and poisonous plants at every turn. Then there’s the maddening isolation that drives him to the brink of insanity. There is only one way off this island and it’s more difficult than anything he’s ever imagined. It’s much easier to face mortal danger than the demons within. Will he find redemption or another unexpected offer?

Jan Sikes openly admits that she never set out in life to be an author. But she had a story to tell. Not just any story, but a true story that rivals any fiction creation. You simply can’t make this stuff up. It all happened. She chose to create fictitious characters to tell the story through, and they bring the intricately woven tale to life in an entertaining way.

She released a series of music CDs to accompany the four biographical fiction books and then published a book of poetry and art to bring the story full circle.

And now that the story is told, this author can’t find a way to put down the pen. She continues to write fiction and has published many short stories with a series of novels waiting in the wings

90 responses to “Jonah, on #LisaBurtonRadio”