Lazy day, with a mummy

We all got to sleep in, but eventually dogs must be walked and fed. It wasn’t long, but it was better than I usually get. Of course, I was up late watching my team lose another game. It’s not looking good for them now, because they must win the next three in a row to move on.

I called my parents while Old What’s Her Face went to Dutch Bros. for her coffee fix. (I make my own at the house, old school.)

When she got back, we had a nice breakfast featuring a cherry chipotle bacon we bought at Whole Foods yesterday. Not much chipotle flavor there, but it was really good.

We’ve been holding on to The Mummy, Tom Cruise version, for a long time. Today we decided to watch it. Some good, some not so good, but I enjoyed the movie. 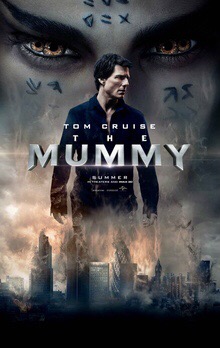 It was a little too much like the Brendan Frasier films for me. I really enjoyed those, and I think they would have been better off to start fresh. It was basically the same story with the sexes flipped. There were some new ideas involving wind scorpions and rats, and I give them credit for that. I enjoyed the two second flash of The Book of the Dead from the earlier films. In my mind, that nod to the predecessors was all that was needed.

I got sidetracked with all the mercury in the story. I thought for sure it would flow somewhere to set off a trap once the weight reached a certain point. I was wrong. Then when they found the pool of it, I wondered if a person could actually walk across it or if they would sink. Mercury is pretty dense. None of this was part of the movie, just my imagination at work.

I got a bit frustrated with the face in the sandstorm, and the ripoff from American Werewolf in London. This is what I refer to as low hanging fruit. Maybe they should have reached a bit higher. Maybe I’ll write a Story Empire post about low hanging fruit.

I give them credit for trying with the secret society, but maybe Dr. Jekyll was a bit too much. Other than that, it was pretty cool. By the end, I decided I liked it. If you have a lazy Sunday it might be worth your time.

I got a bit more Lisa Burton Radio work done, and spent some time with a couple of outlines. I still don’t think they’re ready. I’m going to start on the novella, Estivation, very soon and it will be fine. It’s about time to start thinking up character names.

The novels just need more daydreaming effort. So far it’s been difficult to come up with the twists and turns I need.

For my science fiction piece, referred to as Grinders, I have more plot for my antagonist than my protagonist. This is going to be one where the bad guy is a bit more sympathetic than normal. He needs to get caught in his misguided deeds, but still earn some kind of possible happiness. Don’t ask, it’s complicated. This one also needs a bigger and more shadowy bad guy the protagonists can catch. I’m thinking a bio-terrorist in keeping with the theme of the story. Perhaps my bad guy can have the final piece of the puzzle and cut a deal at the end.

I’m toying with two others, and need a much larger plot for one of them. I want the whole story to be a big con game, and coming up with the clues  readers can misinterpret is proving difficult. If I can pull this off, everyone goes “Oh yeah…” at the end. I hate to say it, but some test chapters might be in order here. (I hate test chapters.)

The idea of writing a team story for a bunch of my existing characters won’t leave me alone either. I think this is bound to be a loser in some ways, because I don’t have the reader base to suck everyone in. On the other hand, it could cause readers to check out my backlist too. Maybe they like Clovis and go back to read Playground; that kind of thing. In some ways, this story is coming together faster than the others. The trick here is that every character needs his or her moment. I have a great bad guy to vanquish in mind, because it has to be bigger and more dangerous to require a team in the first place.

Estivation is next. Grinders really needs to be on deck, but I don’t know if I’ll have a good enough storyboard ready. It’s about time to take out The Hat and start slicking it up too. I’ll probably give it a couple more weeks, but it’s on my radar.