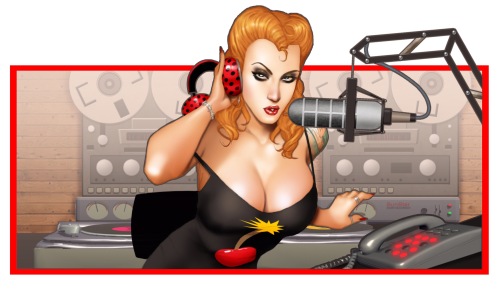 Coming at you with one point twenty one jigawatts of power, this is Lisa Burton Radio. I’m your host, Lisa the robot girl. With me on the phone today is Commander Liam Joffener. “Welcome to the show, Commander.”

“I’m glad to take a few minutes out of my day to speak with you.”

“My understanding is that you’re trying to capture a criminal named Lareina Elliot. How can my broadcast help you?”

“Elliot is no less than a domestic terrorist. She is responsible for several deaths. Not the least among them being the assassination of a hospital volunteer. She has three underage hostages who are in imminent danger. And, while we do have an interstate Department of Protection manhunt underway, it is important for people not to panic. Agent Christian Deverell is our top CCSA — Crisis Containment and Suppression Architect. He is familiar with her motives as well as her cross-race involvements. It won’t be long before he flushes her out and that is where the public comes in. We need eyes and ears. Not to act, but to see, hear and let us know. She and her people have a disregard for segregation policies, which makes her stand out even as she endangers us all.”

“Hang on a second. Segregation policies? Why would segregation ever return, and who gets to decide which ones are the elite people?”

“This isn’t last century. Everyone knows proper segregation is necessary, for the good of all and the harm of none. Each of those youngsters are from a different ethnic background. They are all equally in danger. She ripped those kids out of the Excellent Program. The EP is the place where brilliance is revealed. Those young minds are the best hope this country has right now. It is their unique differences that bring us answers. By harming those children — which obviously is her ultimate plan, Lareina Elliot is fueling yet another Civil War.”

“Why would she do that? What is her purpose?”

“To repeat myself. Her purpose is to start another Civil War. She has known relations in the anti-government hate group know as the Revolutionaries who seek to undermine government rule at every turn.”

“So this guy you put on the case, Christian Deverell I think you called him, his job isn’t really to arrest Lareina and bring her in, is it?”

“Deverell is a Crisis Containment and Suppression Architect. His job is to protect our citizens by removing the threat of terrorism. What else would he do…but bring her in…to face…justice? However, if she doesn’t wish to comply, she is, a murderer. He will deal with her as such.”

“I don’t know, it just seems like a return to a status based society always leads to eliminating dissidents. Nobody wants to listen to them and try to understand. Maybe find a new solution that helps everyone.”

“The solution we have helps everyone. I don’t think you have to worry about Lareina being heard. She has been heard, with distinct clarity. An Excellence Program graduate herself, she has been a counselor at our preparatory school, The Presque Isle Academy, for five or six years, now. In fact, she and Deverell studied together and he was her liaison for the program kids with disciplinary and disruption issues. She has had every channel available to air her imagined grievances.”

“So they were a couple?”

“Elliot is black. Deverell is white. They were never romantically involved.”

“Of course they weren’t. How will being dead make her happier? I’ve been the odd one out, and don’t appreciate all the segregation talk.”

“Lareina cannot live in the world as it is today. She can’t make it into a utopia that never existed. She can’t take lives and punish innocent children as a means of making war durning this troubled time in our great nation. If it comes to death -and I didn’t say that, you did. If it comes to her death she won’t have the weight of all those victims of her actions on her head. She won’t be destroying Deverell’s reputation any longer. She won’t be destroying the lives of the children she was entrusted to guide. She won’t be exposing the Excellence Program to its enemies.”

“I kind of hope they get back together and stick it to the system.”

“Isn’t going to happen. No one beats the system. Not my system, anyway. I have another man on both of them. MaKade knows how to take care of business. You’re sounding like a dissident sympathizer. Where is this radio station of yours anyway?”

“You can read all about Lareina and Christian, and all the other players in KAYOS: The Bad & The Worse, by Tracy Ball. I’ll include all the deets on the website. Now I’m off to scrub all my digital signals and make sure Commander Joffener and his jackbooted thugs can’t find me.” 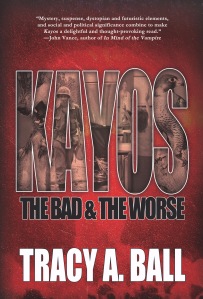 Hell has two fires— War and Women
Lareina Elliot discovered her idea for making students loyal to the government is being implemented to further the war. It has become her life’s work to undermine that effort.

Agent Christian Deverell promised to protect Lareina, always. But that was before he flipped sides, before their history got dirty, before he commissioned her adopted brother to assassinate her.

Cpl. Silas McKade never misses. He has a death warrant for Lareina—the woman who means everything to him— and a soul full of hatred for Christian—- the man he wants to be. He’s either going to break Lareina’s heart or stop it altogether. 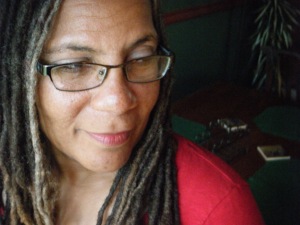 Novelist, Reviewer, Content Editor, Blogger, T-shirt Wearer, and Professional Snacker; Tracy A. Ball is a native Baltimorean and a veteran West Virginian whose family is blended from three cultures. She has opened her home to foster children, drug addicts, AIDS victims and anyone who needed an assist. She has an equal number of conservative and liberal friends. She knows people who have committed murder and people who have dined with the Pope.
Which is why she writes sweet stories about tough love.

Her other published works include:

The Right Way To Be Wrong

Connect with Tracy on social media: