The saga of today

I took today off for my annual exam. This is because sometimes there is blood involved and I did not want to go back to the office under those circumstances.

On my first appointment I saw one doctor, then he kicked me to the curb. After that I saw Dr. Rowe. I liked Dr. Rowe, because he talked to me in plain English and took time to answer my questions.

After three years, Dr. Rowe has kicked me to the curb. I hate how modern medicine does this.

The new guy dropped the idea that he’s been at The Tumor Institute for about six months. To be honest, he looked like he’d been licensed about six months. He also let me know Dr. Rowe is still with the practice, but works across the street in a different office now. Why the hell wasn’t I given the option of going across the street and having my appointment with Dr. Rowe?

My PSA is great now, thanks to the medication. When I asked the new kid about it, he wanted to explain some kind of long division and how to compare the number to the general population. He also wanted to stick to the number. I told him, “I don’t need to know all that, and don’t know what the number means. How about you tell me if it’s normal or not?” Apparently it’s normal. (Trying to talk over my head is not going to work. I’m not the one who nods demurely, then shuts up.)

When it came time for the exam, I told him Dr. Rowe said we’d only be doing that every other year. He seemed kind of sad, and told me I didn’t have to if I didn’t want to. This kid looked like someone who wanted to stick his finger up my butt, so I declined.

My hope now is this kid will move on before I have to go back next year. Otherwise, I may spiral into cancelling my appointment and not going back at all.

I’m looking at it as good news this time. My blood test was great, even my blood pressure was great. It’s like when our heroes survive the ordeal portion of our stories. After the ordeal, the hero gets a reward. 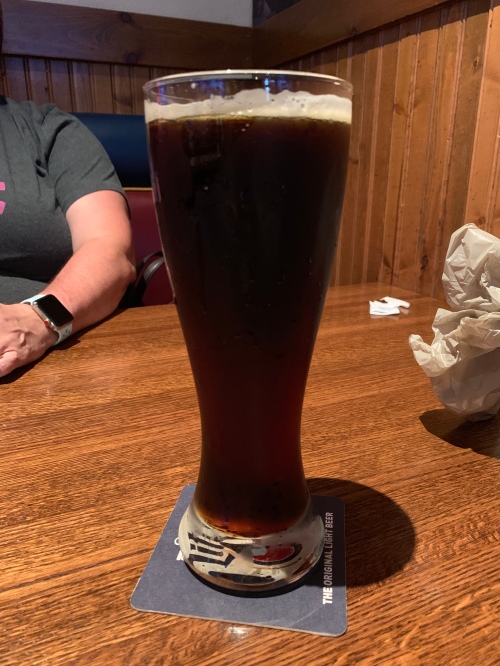 Old What’s Her Face is off today, and she wanted to go to Old Chicago for lunch. This reward is an Odell’s Brewing Big Cookie A La Mode. It’s a special brew that OC got in and promoted to come sample. It’s a very good beer, but does not taste anything like a cookie or ice cream.

I go back to work for the rest of the week. Old What’s Her Face has to work nights this weekend, something she’s never done before. (People shouldn’t have these disruptive schedules after a certain age and years on the job.) My holiday weekend will be spent walking on eggshells while she tries to sleep.

Fortunately, my keyboard is pretty quiet, and I might wrangle some writing time.