My wife insisted on the Hallmark Channel all day today. Remember what I said about my wonderful writing weekend? Yeah, I sure wish that storm hadn't changed her plans. By the way, is there a rule that every elderly person in a Hallmark movie must smile like an idiot at all times? These movies could use a serious dose of Billy Bob Thornton or Anne Ramsey.

I have another story idea that I'm tempted to write as a vignette. I want to start a storyboard instead. I have a thought about trying to release a novella or two, and it might make a fun one.

This idea was inspired by an image I saw on Facebook. It posted in two different timelines a week or so ago. Do you think I can find it again? I searched FB, DeviantArt, Bing images, and Google images using every description I can think of. If you're inspired by images, save them the very second you see them. If you don't, you'll find yourselves in my position.

While I'm serving time in Hallmark jail, I haven't been able to accomplish much. I tried to relocate to another room, but there aren't any comfortable places to sit. I want to finish reading a book too, and it's all about the same problem. I suppose I can deal with the critiques I received last week. Maybe I should pay the bills too.

I managed to assemble and schedule the next Lisa Burton Radio, and it's a fun one. I also managed to write one guest post out of four I committed to. I only need three more in a week, so not impossible.

I need to stop blogging about my failures and post something about some successes. I just need to create a success or two.

Okay, I'll deal with critiques and bills so they aren't distractions when my time finally comes. I'm off on Monday, and the only distraction will be Otto. 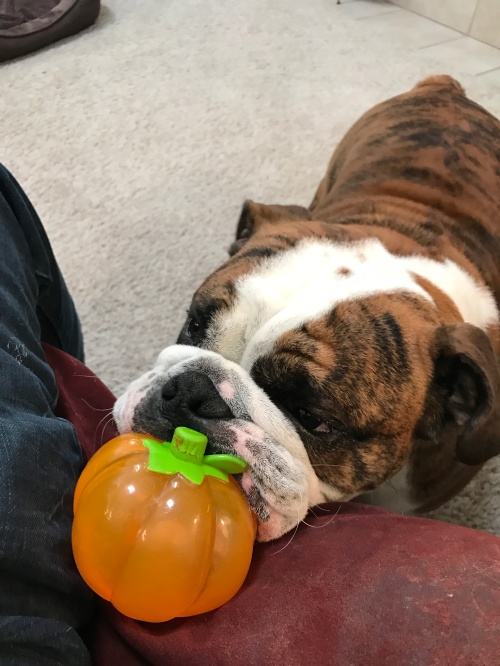 He's no small obstacle. I took two fifteen minute breaks to play pumpkin ball while typing out this post. He throws it right on my keyboard if I don't pay attention. So this post is +/- 400 words. It took about 30 minutes of pumpkin ball playing to finish. If I write 1000 words (which is nothing) on Monday, I anticipate the pumpkin ball will eat up 75 minutes.

An unexpected extra on planning

I recently spent several days going over my cork board version of outlining. Some of you really got into it, while others waited for a different topic. It's okay, there will always be another topic.

For those who liked the posts, I learned most of it from a writer named Alexandra Sokoloff. She started life as a screenwriter, and now writes novels. She knows more than I do about the process. I did my usual gathering of nuggets and used the parts I liked.

She isn't on WordPress, so it isn't easy to simply re-blog her post today. She's doing an act breakdown of Silence of the Lambs that's worth reading. She explains some of the fairytale aspects, use of scenery, and subtle things we novelists can learn from.

For those of you who are interested, here's a link to the post. I used a copy and paste to add her to my Reader stream, and the RSS link to follow her in that reader too. Her site has a ton of information, and I wouldn't want to miss anything.

Today, Panama is live on the Kindle store. You can download it here: Panama.

I headed for the writing cabin to finish my upgrading. The first part involved adding the promotional page to Wild Concept so folks might easily find Panama. It wasn’t terribly hard, and it’s in review once more. I used a page break for the promotional pages, but the preview doesn’t display like it should. I’m interested in any feedback readers have on the end pages.

Bento* poached a couple eggs and made me some coffee. “So that’s it? The book is for sale?”

“Yeah, not too glamorous. Just a bunch of computer work,” I said. “Now I have to update the blog with an image link so people can find your story easily.”

I used the WordPress Image widget and set it up. “Link to the Amazon page, check. Minor word copy, check. Load the image — What the hell?”

I opened my image library, copied the URL, and it refused to load.

The rumble of a Harley Davidson sounded down the valley. We stepped outside and saw Lisa** winding toward the cabin along the gravel road.

“She will know what to do,” Bento said. He took out his Bull Durham and rolled a smoke.

Lisa rolled to a stop out front. When she stepped off her bike her hair was brunette. She lifted Bunny’s flight kennel from the sidecar and untied her suitcase from the rack on back of the sidecar. “Hi guys; miss me?”

“What have you done with your hair?” I asked.

“I had to make some changes in Las Vegas. I’m kind of known at the casinos there. I really cleaned up though. You boys grab my stuff while I park. I’ll meet you inside.”

We carried Bunny and the suitcase into the living room/lobby. Lisa pulled around the hill and parked in the basement. When she walked in the cabin, she had her boots slung over her shoulder. She knew Bento’s rules about shoes inside.

After she settled in, I told her about my predicament with the WordPress widget.

She found the enchanted beer horns and filled them up. “It’s actual Romulan Ale. The Romulans showed up at one of the comic conventions and I thought of you.” She set the horns on the counter and they ran to Bento and I.

“You need to know when to celebrate. Getting Panama online is a big deal. All the other stuff can wait.”

I took a swig of my beer and said, “It’s just so damned frustrating. I know what I want, and it won’t accept the link.”

“No. I want to know how to do it myself. I did it for your story, and should be able to do it this time too.”

She padded across the kitchen on bare feet and stopped at the refrigerator. She bent down and opened the freezer drawer.

“What are you doing?” Bento asked. “I’ve already sat out steak to thaw.”

“It isn’t dinner,” she said. “Craig’s going to need his left brain.” She sat a frozen bundle on the counter. It was covered in butcher paper and looked a little freezer burnt.

She set the microwave to ‘thaw’ and turned back around with a flip of her hair. I hadn’t noticed before, but her eyes were brown again. She removed her eye units and changed out the brown caps for her normal green ones. “The hair will wash out in a few days to a week.”

Coughing and sputtering came from the microwave. “Somebody get me out of here.”

Lisa opened the door and my left brain stumbled against the side of the oven. “That rotisserie setting makes a guy dizzy,” he said.

“This is the most screwed up place I’ve ever been,” Bento said. “You’ve been working all this time with half a brain?”

“Some people don’t give me credit for even that much.” I grabbed the left brain and carried him to my office.

After I explained the problem, Lefty had me try a complete reboot of my system. It didn’t work.

“Try this,” Lefty said. “Open the cover image in a new window. Copy the link over there and paste it in.”

I did what he said, but it didn’t work. “You’d think there would just be a button or a browse for image thingie.”

“Thingie? Is that how you talk without me?” Lefty asked. “I think I prefer the deep freeze.”

Lisa polished her nails against her blouse and raised and eyebrow.

“I get it. You’re a robot. It’s probably nothing to you, but I have to learn this stuff.”

Lefty took a swig of my ale and said. “The URL under the Wild Concept image looks different than the one you’re trying to get for Panama. We need to find out where that URL came from and use that one.”

We clicked around for several more hours. Finally, Lefty said, “Look at this. When I edit the image there are actually two links. One above the image, and a different one near the save button. It runs off the edge, but it looks the same as the Wild Concept link.”

I copied that link and pasted it in. It had references to Helvetia font, all kinds of braces, slashes and brackets. I uploaded it anyway. It failed.

“Here’s the deal,” Lefty said. “I still think it looks right. Paste the link into a document so I can see the whole thing.”

I did as told, using my Notes app. It took up a quarter page.

Lefty leaned forward and squinted. “The part you want is in there. I want you to delete every thing that’s either side of http and jpg. Just keep that part.”

“Now copy all that’s left and paste it into your widget,” Lefty said.

Copy – Paste – submit. “It didn’t fail. Better reload my blog page and see how it displays,” I said.

“Perhaps you should click on it to make sure it goes to the Amazon page,” Bento said.

I clicked the image, it went to Amazon, all is well.

“That was kind of a cowboy fix, but it worked,” Lisa said.

“Sometimes you just have to think logically,” Lefty said. He pointed to his half of the cerebral cortex. “I think you need me more than you know.”

“Sorry Bub,” I said. “It’s back to the freezer for you. I remember all those fights you and righty got into. You have your moments, but writing isn’t your strong suit.

He wrapped a skinny arm, that looked more like an artery around my beer horn. “One for the road?”

“Why not,” I said. Lisa topped off our beer.

* Bento is a supporting character in Panama. He’d appreciate a reader or two.

** Lisa is the main character in Wild Concept. She’d appreciate a reader just as much.