Tag Archives: give away

Hey gang, Mae Clair is releasing her book, A Thousand Yesteryears very soon. I've been excited about it for some time, because it includes the Mothman. Here is your chance to win a copy of the book by entering a Goodreads giveaway. I'll let Mae tell you about it. Just look at that wonderful cover. 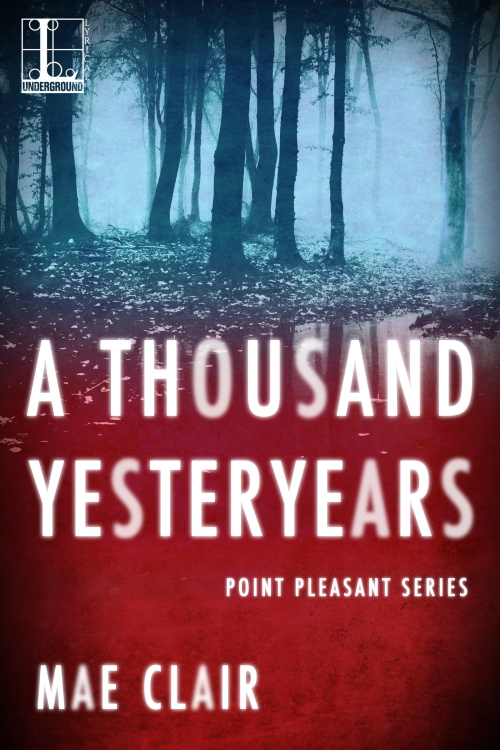 A huge THANK YOU to Craig for allowing me blog space to share some exciting news. Kensington Publishing is doing a Goodreads Giveaway for a paperback copy of my upcoming release, A THOUSAND YESTERYEARS. There will be two—count ‘em two—winners. The giveaway is open now through February 29th (how cool, a leap year). If you’re interested, you can enter here: Goodreads Giveaway!

A THOUSAND YESTERYEARS is a tale of mystery and suspense centered around events that took place in Point Pleasant, West Virginia. You’ll discover a small river town plagued by tragic history and rumored sightings of the Mothman—a terrifying creature said to haunt an abandoned WWII munitions site.

Behind a legend lies the truth…

As a child, Eve Parrish lost her father and her best friend, Maggie Flynn, in a tragic bridge collapse. Fifteen years later, she returns to Point Pleasant to settle her deceased aunt’s estate. Though much has changed about the once thriving river community, the ghost of tragedy still weighs heavily on the town, as do rumors and sightings of the Mothman, a local legend. When Eve uncovers startling information about her aunt’s death, that legend is in danger of becoming all too real…

Caden Flynn is one of the few lucky survivors of the bridge collapse, but blames himself for coercing his younger sister out that night. He’s carried that guilt for fifteen years, unaware of darker currents haunting the town. It isn’t long before Eve’s arrival unravels an old secret—one that places her and Caden in the crosshairs of a deadly killer…

A THOUSAND YESTERYEARS releases on April 26th, but the ebook version is already available from Amazon and all other major book sellers. If you’d like to pre-order you can find a complete list of links here.

In the meantime, I invite you sign up for the paperback giveaway at Goodreads and tell your friends! The Mothman Cometh!

Mae Clair has been chasing myth, monsters and folklore through research and reading since she was a kid. In 2013 and 2015, she journeyed to West Virginia to learn more about the legendary Mothman, a creature who factors into her latest release.

Mae pens tales of mystery and suspense with a touch of romance. Married to her high school sweetheart, she lives in Pennsylvania and numbers cats, history and exploring old graveyards among her passions.

Look for Mae Clair at the following haunts:

Tagged as contests, give away, giveaway, Goodreads, Mothman, mystery, suspense

My dear friend Sue Coletta put together a Rafflecopter event that you can take part in. She organized 30 of her favorite authors in one huge giveaway.

These are mostly crime authors, and if you know Sue that makes sense. She saw fit to include a couple of paranormal tales, one of which is my own Will O’ the Wisp.

Logic dictates: 30 of her favorite authors, I am one of those authors = I have a fan. (No takebacks)

There are some pretty heavy hitters on this promotion, and I’m honored to stand among them.

Some of you will be inclined to go right to the entry, and so here is the link: Rafflecopter

Others will want to see what’s up for grabs. I’m going to let Sue tell you about it herself. Take it away, Sue.

In keeping with the holiday spirit I have the best surprise ever. I’ve rounded up my favorite authors and asked if they’d like to participate in a special holiday giveaway. And they said yes! From now till New Year’s Day you can enter to win…are you ready?… 30 free ebooks. Yay!

Each and every one of these authors are amazingly talented. My TBR list is so tall I can barely see over the top. Between me and the hubby they’re all on our list.

Inside the covers of these virtual pages we’ll laugh, cry, tremble in fear, go to exotic locales or dredge through the dark streets of places more familiar. We’ll flip pages late into the night and wake with a renewed passion to run downstairs and finish where we left off. We’ll fight for our heroes, rejoice when/if the antagonists burn in hell. There are so many magical moments that await us, I can hardly wait to dig in.

In no particular order I have included the descriptions of each book. Take your time to browse through, but don’t forget to enter the giveaway. Three lucky winners will win all 30 titles. Go to Sue’s site to read more about this amazing promotion.