About that time of year

I’ve been looking for a month for something close to home, but with zero luck. Store keepers are full of empty promises.

I decided to go for my best chance, and went to the Boise Co-Op. The old one downtown. Bingo! 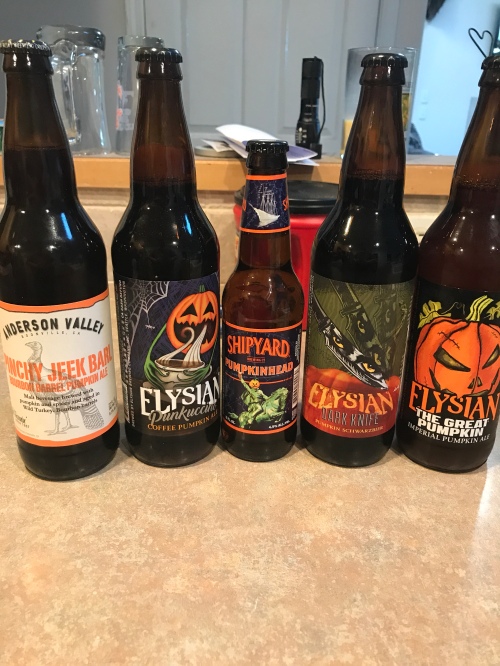 That’s right, everyone. It’s pumpkin beer season. I had the Anderson Vally yesterday, and it was fantastic. They are one of my favorite breweries, and never seem to let me down.

I just opened the Elysian Dark Knife a minute ago. It isn’t quite as good, but this does not mean bad. Elysian is also one of my favorite creators.

The Co-Op beer man said he only had seven bottles of the Shipyard Pumpkinhead, so I bought one of them too. My traditional favorite is Elysian Nightowl, but he only had cans. I have my fingers crossed that I can find a couple of bomber sized bottles before the season is over. Either that, or maybe find it on tap somewhere.

Because I had to move my flex day, I wound up with Friday off this week. Oddly enough, Monday is my day off next week. What a cool break!

I spent my day doing edits on a couple of existing projects. Some of this involved some word searches and such. Mind numbing stuff, actually. Hopefully, pumpkin beer will recharge my battery.

I intend to add some new words to an ongoing project before the weekend is over. I also want to work on a couple of outlines. One will be a novel, the other a novella. (With any luck.)

I might check on a baseball game sometime this weekend. The payoffs are stacking up, and I find it interesting.

My weekend list isn’t huge, but it’s bigger stuff this time. We’ll see how it all shakes out by Monday.