Vacation posts are kind of hit and miss in my experience. Since it's all I have right now, I'm going to go for it.

We went on the walking voodoo tour last night. Turns out this was a very PC kind of presentation. They drew the obvious connections to Catholicism, and discussed the ways it came from Africa and evolved after it arrived. Everyone worships the same god, and while the Catholics have saints, voodoo has other names for lesser deities that will sometimes intercede on our behalf.

All the shops seem to have two active altars, and shoppers are forbidden from photographing them. However; those on the tour are invited to photograph them. I have no idea about the difference, but I have a theory money is involved. I wanted to explain that, because of the sign in my photograph. I'm not one of those tourists who fails to follow the rules. 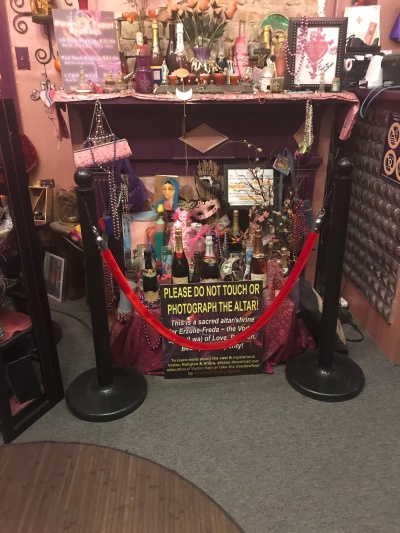 This altar is for a goddess who is also in charge of inspiration. Think of her like a Muse among her other responsibilities. She's also fond of very high quality things. Notice the champaign offerings.

Of course, everything is very benign even good. Questions from the crowd about voodoo dolls and zombies were casually poo pooed. Some dumb ass had to ask the difference between voodoo and hoodoo. (It was me.) They distanced themselves from hoodoo, explaining it isn't a religion but more of a practice. Then they explained all the things Hollywood comes up with make better fiction. (Kind of a please ask questions, but not you buddy response. I'm sure John Howell could make a ten things list about this.)

They noted that John Paul II held mass here, and met with a group of voodoo priests. Once he understood the similarities, he declared voodoo a companion religion to Catholicism. At least that's what our guide Daphne said. (My wife didn't like all my Scooby Doo jokes after learning the guide's name, so I'll keep them to myself.)

On the better fiction point we are in agreement. Voodoo, or hoodoo, are better when they're fantastic and dangerous. I will continue to step up my fictional game on this basis. In fact, Lorelei my Muse visited me and gave me an outstanding character. He is a supporting character in my mind, but I already have about six vignette ideas for him. I just need to find a hero and a plot to go with him. This is much more difficult than when the plot comes first. In fact, I'm already struggling with an old concept of how to keep magic from being the cure for everything. Any paranormal or fantasy authors will know what I mean.

We've eaten a ton, and that doesn't seem likely to stop. Last night we went to Acme Oyster Bar. (I expected Wile E. Coyote to make an appearance, but he didn't.) We did the old people thing and shared a couple of dishes. The charbroiled oysters were fantastic, and so were the red beans and rice, rounded out by fried stone crab claws and fried crawfish tails. (In Idaho we call them crawdads, but since we're here…)

Today we're being lazy. We had room service breakfast, with beignets (And praline sauce). Then Old What's Her Face booked a pedicure. I think I'll just hang here until she's ready to go out. I'm kind of tired, and we walked about a thousand miles in the last few days. New Orleans makes me glad I never rented a car.

Drivers here are aggressive and impatient. I've heard more car horns in a long weekend than in a year in Boise. Boise drivers are crazy too, but they don't ride on their horn like they do here.

This is a town for walkers, at least this part of town. The humidity and heat make this difficult, but we did it anyway. Since we were walking so much, I decided to play Pokemon Go while doing so. I missed the first one of these I saw, but the second one is mine.

This guy is regional, and does not appear in Idaho. I'm sure not everyone is into this game, but it's kind of fun to find something you just can't get everywhere.

It's a long ways, but I'd like to go to Jean Lafitte's Blacksmith Shop today. It's a bar, and Lafitte is a genuine part of NOLA history, as well as American History. Again, we have no agenda and we may, or may not get there. Old What's Her Face refuses to try the bicycle rickshaw taxi things, and it's a long way to walk.

Tomorrow we fly out early, and it looks like we have three legs to get home. (The joys of flying on standby, but you can't argue with the price.)

I saw another bald eagle along the Boise River. These have always been good omens for me. They seem to indicate success in whatever I'm striving for at the time. Looking forward to accomplishing some small goal this week.

I talked to my employer, and we're going to see if the city will come haul the trash out of the stream behind the office. I wrote my vignette and have no more use for whatever old chicken coop it turns out to be. They like to remove anything that impedes the flow, because of flood potential. They may clean up some of the branches where the wood ducks hang out too, but the ducks can find new ones.

I seem to have timed my commute this week so I fall behind a lady from Canyon County. She likes to hold down the fast lane, and guarantees our safety by driving below the speed limit. Cars flow around her like a bolder in the stream, but on the right hand side. This is dangerous. I have no problem with her anchoring the fast lane, but she should at least drive the speed limit. Even then, she'll be the slowest person on the road, but at the speed limit, I really can't complain. (I still will, but it won't be justified.)

Larissa N. Takahassi followed me this week. (Again) She seems to follow me about every two weeks. Larissa has an online makeup store of some kind. I don't buy a lot of makeup, so I don't follow her back. Seems to me that, barring WordPress disasters, you only have to follow me once.

This is a game. She's out there following people at random, possibly to get those who automatically follow back. Then she unfollows. I suspect this is a game designed to eventually sell her online makeup store and use the number of online followers to indicate value.

I checked this morning, and she is not among my followers today. Maybe she didn't like this week's posts. Maybe I should exorcise her by writing her into a horror story.

Otto is snoring beside me in my recliner. He usually gets restless and jumps down after about twenty minutes of poodle time. That gave me a chance for this random babble. Then I need to saddle up my yak and head for the steppes.

Maybe a progress report later today, if the eagle omen works out.

I don’t even know where I’m going with this

I have a full hour for lunch today, and thought I’d share a sad story. It doesn’t matter in the larger scheme of things, but it offers some insight into the nature of humans. Maybe I can use that in a story one day.

I live by the alarm clock during the work week. Animals seem to live by the solar clock. There are days during the year where we sync up. That has been the case for the last few weeks.

I start for work on a semi busy road called Star Road. It’s only busy during the commute, and still isn’t as bad as downtown. Where I turn, there is a hobby farm across the street from a wheat field. Every morning I see two domestic ducks the other side of the stoplight crossing the road. One is the typical white duck, the other bears mallard colors. They cross the street into the wheat field.

I imagine them like two old men spending their day in the wheat. The white one could be a female, for all I know. People give them the right of way, and they’re kind of cute. The white one started limping about two weeks ago. The mallard colored one always waits for him, and quacks for him to hurry up.

In some ways they remind me of the retired farmers who still go to the coffee shop every morning to gossip with the active farmers.

Today, these ducks were splattered all over the road. Not just the white one, but the best friend too. I can just see the greenhead quacking for his friend to watch out. It bothers me to a degree.

I’m not overly sentimental. I eat tasty animals, and that includes ducks. I’ve even harvested my own game, slaughtered chickens, and butchered beef. I know where my pork chop comes from, and that beaver fur in my cowboy hat probably wasn’t donated by the beaver. Leather belt and shoes, check, alligator wallet, check.

Those deaths happened for a reason. They were planned, and had purpose. Nobody benefited from the death of these ducks. They weren’t marauding sheep killers, poisonous snakes, or someone’s supper. It would have made more sense if someone stole them for dinner.

Somebody’s text message was too important. Perhaps someone accelerated and declared how many points they were worth. Humans are strange, and perhaps my feeling on this is strange too.

It doesn’t surprise me at all. I once had a guy pass me on the right, because I stopped for a blind man with a guide dog in a crosswalk. There is a school for the blind right downtown. This driver wasn’t concerned for a disabled person, he would have no problem running down a duck.

So I don’t know where I’m going with this. Maybe I can use this as a character trait one day. Maybe my own thoughts about this are usable too someday.