My brother came to visit last weekend. We used the guise of harvesting my crab apples to get to see each other. Last year he bought an apple press, and made the sweetest apple juice ever. It was wonderful, but could have used something to balance the sweetness. This is where my crab apple tree comes in.

My brother is a man of few words, so we’re going to have to tell this story mostly with pictures.

Start with the pretty red fruit he took to Nevada. It’s ready today, but many apples won’t be available until later this Fall. He plans on freezing the juice and holding it for later.

It may not seem like much, but if you filled these same buckets with full sized apples, you wouldn’t have as much fruit. The smaller size of these lets each bucket hold more, and the giveaway is the weight. Bigger fruit has more air between the apples. 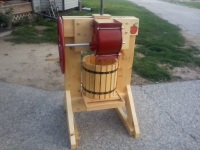 This is his apple juicer. He bought it last year and it looks to be a quality craftsman’s product. It has much more soul than some stainless steel, motor driven product. The fruit goes into a hopper at the top of the red piece.

Here is a better view of the hopper. Load her up, turn the wheel, and make apple juice. I’m sure you could use it to juice anything you wanted, but it might flavor the equipment. This one is just for apples. (I could probably make some good catfish bait with this. A few crawdads, some crickets, just saying.)

Juice comes out the bottom and drains into a bucket.

I am surprised that the juice is red. It’s actually pretty cool that it is. It will give a charming color to any juice he adds this fall. Just imagine the awesome jelly I could make with pure undiluted juice.

He told me the flavor is tart, but very complex. That is the whole point of using it. The juice from last year was like honey. I’d really like to try a bottle of hard cider after he gets his Fall apples juiced. This juice is destined for the freezer for now.

He reported the recovery is about 10%. That isn’t horrible, but I was hoping for about 20%. The residue will go on his compost pile.

I have hunch the compost won’t stay there very long. He said a herd of mule deer invaded his yard the minute he started his apple mill. The scent must have drawn them in. They’re kind of cagey, but he managed this poor photo of a young buck as proof.

I hope the formatting works out in this post. There are more pictures than text.

My family has always been into preserving lost skills. Regular readers know about my sourdough starter, pickling crock, and canning jars. My brother even has a fully functional blacksmith’s shop.

What skills are you preserving? Do you make bent willow furniture, mud ovens, pottery? I think it’s important to save these skills for future generations.

Something tells me I’m due for a visit

Today was kind of a slow blog day. Not too many new things in my Reader. Only one blog visit from some lucky visitor from Italy. It looks like many of the bloggers have a real life and better things to do today.

Old What’s Her Face* bought me a new bottle of Angry Orchard Cider when she went shopping. It’s a new kind to me, and it’s absolutely awesome. Look what it’s called though.

Something tells me I’m going to have a visit from Lorelei** very soon. Maybe I’d better start my outline before she shows up.

* Not my wife’s actual name.

** Lorelei is my Muse. She expects me to start writing again soon.

Another Saturday without new words of fiction

Old What’s Her Face* interrupted the jam session from my last post and wanted to go to town. She thought it was time to air me out.

We went to the new Boise Trader Joes. The hoopla died down, and we were able to find a parking space. We both are glad we checked it out, but don’t see what all the hype is about. The old Boise Co-op has more to offer, and they’re about to expand. It was more like checking something off our list than anything special.

I was good though, and frequent readers know what happens when I’m a good boy. We drove down the street to the new Woodland Empire Ale Craft shop. It’s one of Boise’s newest breweries. They didn’t have any food, but I threw in one of my old growlers, because I intended to be a good boy all along.

The beer there was wonderful. I sampled three and wished I’d brought my second growler too. I loved their milk stout, Belgian, and English bitter. The milk stout was my favorite, but they weren’t offering growlers of it. It was a tie between the other two. I don’t like hoppy beers, like IPAs. On the other hand, I’ve never met an English bitter (ESB) I didn’t like. Since ESB is rare, I took home a two liter growler of it.

But wait, there’s more. Old What’s Her Face was hungry. She’d been googling out in the truck. There is another new brewery around called The Edge Brewing, and its food is getting great reviews. I must have been really good at Trader Joes.

The Edge is kind of hard to find, but it’s worth trying. It had the best Reuben sandwich I’ve ever found in a restaurant ever. They brought out a basket of kettle chips while we waited, and they were great too. I drank a stout that rivaled Guinness, but didn’t best it. When our lunch arrived, my side was beer and cheese soup, and it was wonderful. Old What’s Her Face had the fries, and they were top notch too.

I ordered the Belgian triple, which had a cool name like badonkadonk monk. I felt bad for not being able to fill a growler with the Belgian at Woodland Empire. It was outstanding. I would return to The Edge just for the Belgian and the Reuben. But wait, there’s more.

When the waitress asked if we wanted dessert, we declined. They had a tiramisu they called beer-a-misu. I had to try something else. They made a strawberry rhubarb cider. Now I like the occasional cider, and how can you pass up something this quirky? It was really good. The flavors are present, but not overwhelming. It wasn’t like a glass of wine either, like some ciders.

The Edge is a winner. Your girl can drink cider while you enjoy the Belgian beer. (Unless she likes beer. Old What’s Her Face is a tea totaler) They were playing Irish pub music over the top of everything, and I could have stayed all day just for that.

All good things must come to an end. Old What’s Her Face decided I was sufficiently liquored up for a trip to Costco. She took my keys and drove from this point on. We spent too much, and that was probably the point of all that wonderful beer. My wife knows how to play the game.

Oh my God! It isn’t even my birthday, and Old What’s Her Face wants to go to Kahoots for dinner. It’s another beer oriented place, and has the best bread pudding around. Gotta go.

* Not my wife’s actual name.