While we're here, I snapped some photos. This is a fun place, and we only have a few days. It's kind of fun to bounce around without much of an agenda. I did book a walking voodoo tour tonight, but that's about all we have scheduled. The rest involves strolling around and taking it all in.

There is music everywhere.

The occasional feathered person shows up. Makes me wish I'd snapped the girl in the body stocking. They're either over dressed or underdressed. 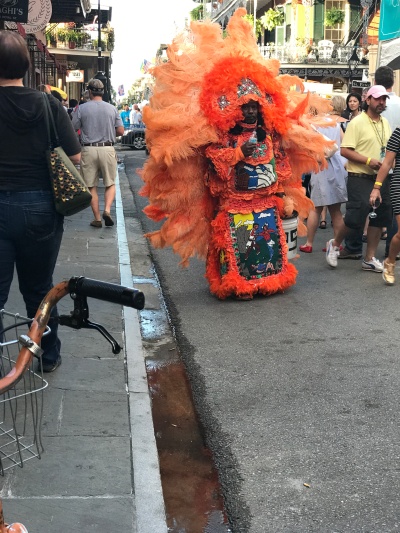 The view out my dirty window this morning. A steamship along the shore, and a giant barge passing behind it. 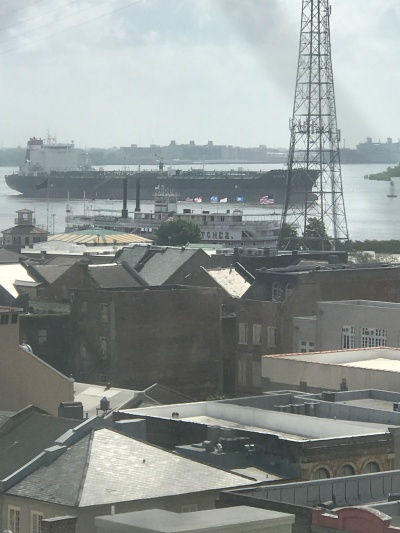 So much wrought iron.

Long time readers will remember I used to keep an alligator snapping turtle. He passed away at about twelve years old. This shell is about three feet long and decorates a shelf where we had lunch. I like oysters, but only certain ways. Turns out a fried oyster poboy is pretty darned good. Bonus points for the bourbon milkshake thingie I washed it down with. 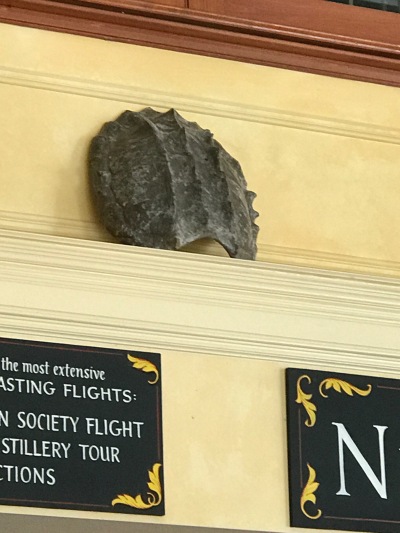 On a smaller scale this two inch cockroach was already stomped when I found him in the men's room. File it under, “Things we don't have in Idaho.”

We're about done drying out under the air conditioner. (Humidity is also something foreign to westerners.) I've been to humid places before, but it's kind of a new experience for my wife.

Before we head back out, I want to remind you to go visit my Sally Cronin post. It's the first peek at the new cover for The Yak Guy Project, and I'm sharing an excerpt.

I managed to assemble a future Lisa Burton Radio interview early this morning, but that was about it. I don't actually have a lot of projects looming right now, so I feel pretty good about this. I hit it hard during my time off and cleared some space.

Our daughter was here, and we all had a nice visit this morning. She and my wife went to the mall, but I still didn't get a lot done. Otto was pretty lively, and I admit to spending a good chunk of time playing with him. About all I managed to do was add one line to my list of short stories. It isn't a bad idea and might make a decent Macabre Macaroni someday.

My main goal now is to finish the first draft of The Yak Guy Project. After that comes several rounds of edits on The Enhanced League. Right now it's looking like Monday is my best opportunity. I have the post over at Story Empire that day, so I'll have to monitor comments more closely. At least I hope there are comments to monitor. It's an opinion piece about “write what you know,” and I'm trying to be opinionated this time.

We had date night at Red Lobster, and got our cheddar biscuit fix. It was a nice date, but we're back home now. Nothing too spectacular, just a few hours together.

Party day was a big success once more. It started off a little slow but that was my fault. Club rules are to send in a link before it goes live so they can include it on the tour page – piece of cake. They also want the post to go live around midnight Central Daylight time. I always schedule for midnightish, so that's what I did. Then I rolled back the time by a couple of hours to make sure it was live when the club expected it to be.

Yeah, when you roll back prior to midnight it doesn't change the date. This means I had it scheduled about 23 hours later than it was supposed to be.

I got it fixed about 4:30AM and sent an emergency email to the club. They fixed me up, but it took several hours. I know I missed some of the early traffic, but it was completely my fault. What a rookie.

There was still a lot of sharing, and some great comments. I gained blog followers too. Every little bit helps. The club will tell me who won the mugs, and I hope to get them sent out PDQ.

There may be a week long delay in shipping. My paycheck job is sending me to Louisville on Tuesday for a convention. I'm excited to go somewhere new, even though I'll be working most of the time. Maybe I'll see something interesting to share with you while I'm on the road. Is there anything I can't miss while I'm there?

I keep thinking about how one week later might have been more interesting, and caused me to stay a few extra days at my own expense. I've always wanted to attend the Kentucky Derby, and I'll miss it by one week. I have a hunch some bourbon will get sampled as a consolation prize.