Macabre Macaroni for everyone 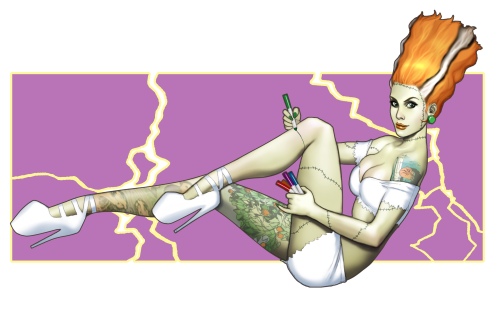 All the Time in the World

I stepped into the puddle then broke into a sprint. Maybe the wet leather would help me keep my footing as I headed into the cracks inside the glacier. I grabbed a torch as I passed by my camp, and increased my speed.

The roaring of the cave bear told me to increase my speed. Maybe he’s afraid of fire. All animals hate fire. Lighting the torch, meant stopping and using my flint.

I twisted and turned, looking for ever-narrower cracks, but none of them would get me out of the bear’s reach. His claws were like daggers. His arms had the strength of a backhoe. Who was I fooling? A bit of ice wasn’t going to stop him. Running was my only option.

As my strength faded, his grunts echoed off the walls of the icy caverns. He’d stopped roaring, and was focused on pursuit. On open turf, I’d be dead now. Just keep moving.

I focused on the watch at my wrist. Fifteen minutes and it would take me back, only it appeared to be dead. Frozen somehow in this prehistoric tundra. Move the arms, and the legs will follow. I passed the remains of a half-eaten stag moose, and kept moving. These wooly hides weren’t made for running.

Bears can run all day and night. If this remains a race, he wins. Eventually. Maybe he’ll get distracted. There was meat in my camp, maybe the stag moose will stop him. The sounds of his grunting strides were gone.

I tucked my watch under my armpit. Sounds gross, but it’s warmer than the outside air. Besides, all this running has it downright hot.

I stopped and showered the oily grass and wool with sparks. The torch simmered to life. A few hot breaths of air, and it burst into flames. I spun around and faced my attacker, but he was nowhere to be found.

I retrieved the watch and held it closer to the flame. It immediately fogged up, then froze. I stumbled down the crevasse and around a corner until I came to a door. Not a hide over a cave, but an actual metal door.

Nothing but a weird blue glow behind me as the flames flickered off the ice. No grunting or heavy pads striking the frozen muck. I touched the door in disbelief. It was real.

It turned the doorknob and went into a room. Two dozen men sat around a boardroom table. Some wore Napoleonic uniforms, or antiquated driving coats with goggles. One wore a leather football helmet.

On the opposite side one wore a form fitting spacesuit, his helmet placed on the table in front of him. Another in one of those pixelated camouflage Army uniforms.

At the head of the table, a man in a Polo shirt and khakis said, “We’ve been waiting for you. Take your seat on the historical side.” When he looked up, it was like looking into a mirror.

I glanced around the table. Various whiskers, glasses, and clothing confused me at first, but every man at the table was me.

“One of you knuckleheads really screwed up,” the version at the head of the table said. “You’ve messed with the timeline so much, I never invented the time machine. Hell, I might not have ever been born.”

“You can’t know that,” I said. “There could be other time travelers.” I pointed at the space traveling version of myself.

“There are no time travelers, even in the far future,” the astronaut said.

“I’ll do you one better,” the head man said. “When one of us travelled to the future, we could not have screwed up the historical timeline. It had to be someone on your side of the table.”

“This can’t be possible. I don’t remember doing any of the things your clothing suggest,” I said.

The driver pulled off his goggles, and placed them and his driving cap on the table. “How’s the bear?”

“How could you know about him?”

“Because I’m you, idiot. You were the first trip. I was there with the bear, and at Waterloo, and several other places. I remember, where you cannot.”

The head man slapped his hand on the table. “We are not here to assign blame. We are all the same person, and all equally to blame here. We’re here to solve the problem.” He stood up and paced away, then turned back. “We all know how to build a time machine. Let’s take stock of what we have available.”

All the other versions of me held up their wrists to show off their own watches, or pulled pocket watches from their coats.

“Let’s start there,” the head man said. “We have two dozen time-changing watches in various stages of improvement. I have cotton cloth, a brass belt buckle, leather shoes, a duct tape wallet with four dollars, and some plastic credit cards.” He pointed to me. “You have leather, skins, wood, and for now fire.”

“Because all we have are the items in this room. Whether it’s chain mail, gunpowder, canvas, glass, whatever. We have to use these items to build a time machine of our own.” He touched his own chest. “Then one of us has to go back and convince me… not to take the trip that caused all this.”

“How will we know which trip it was?” I asked.

“One thing at a time. Let’s build the machine first. Then we’re going to have some detective work to do.” He slapped his hands together. “Shall we get started?”