Looking toward the weekend

I doubt I’m going to do any writing between now and the new year. It could happen, but it’s not high on my list. We have tickets to the new Star Wars movie tomorrow, and that’s my focus now.

We’ll probably catch up on The Mandalorian sometime, too. While we’re there, I have a hunch some other old films are on my agenda.

The free days for The Playground run through the weekend. I know there’s no money in this, but it could bring some new eyes to my work. The fact that some of the characters make a reappearance in Viral Blues could push a few folks that direction. The results were positive yesterday. Check out this horrible screen capture I took last night. 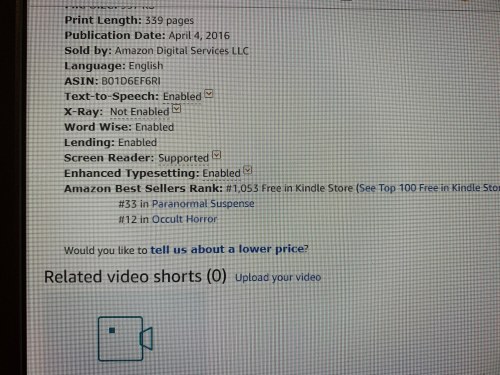 Honestly, “Occult Horror” might not be the best descriptor for this story, but number 12 is still pretty cool. “Paranormal Suspense” is probably a better descriptor, and 33 isn’t bad at all. You can grab your free copy through Sunday (December 22, 2019) at this link http://a-fwd.com/asin=B01D6EF6RI

The hottest new toys of the Christmas season are the Playground Network dolls. They contain a worldwide social network for children. Except the network is controlled by a ruthless businessman with dreams of power.

To reach his goals he turns to the occult. Will our children make up his personal army? Could we have an enemy soldier in every home?

Gina Greybill is a cancer survivor who stumbles into her own brush with the paranormal. She wants nothing to do with it, but may be the only one who can bring down the Playground Network. To do it she’ll have to embrace her new situation, and recover the next generation of Playground software.

There is competition for the software in the form of a brutal thug named Clovis. He’s bigger, more ruthless, and more experienced. To top it all off, he has a head start.

The Playground is suitable for mature readers, due to violence and mature themes.

I hope you all have a great weekend, and May the Force be with you.

38 responses to “Looking toward the weekend”