I think it works…

At not quite 3700 words, I pushed my pirate hat back on my head and looked across the room at Lisa Burton, my robot assistant. She wore her Serang costume and twirled the huge guandao about. 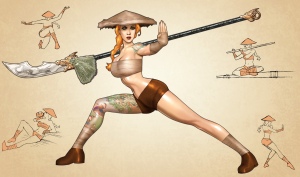 “I think I accomplished what I set out to do today. The Fulminites are terrifying, and no root monsters were killed in this adventure.”

“You killed the Fulminites though.”

“Did I, or did they do that themselves?”

Flattop, the root monster, sat beside my iPad. “Whew! Modders all go splat, but okey dokey at the end. Then get to throw hailstones.”

“I thought you guys deserved a bit of fun.”

“He’s a god that Serang knows about. He brings the monsoon… violently, I might add. Not a lot more than that, which is kind of the Lanternfish style. No in depth legends to slow the story down. He just is what he is and brings the rain.”

“And thunder, and lightening, and waterspouts, and wind that can level a city…”

“Okay. He’s kind of over the top, but that’s also Lanternfish style. I worried about this scene for weeks, but sometimes you just have to put on your pirate hat and hack away at it. I can change it if my critique group thinks I need to, but it’s hard to change something that doesn’t exist.”

“Speaking of your group, did you get the final section of Grinders sent out?”

“Yup, it’s on the way to them. I’m not going to worry about it, until I hear back from them. You did some good work today, Serang played an important role on Kiriwina.”

“I pulled some of them from a map of the Pacific Islands, and changed some with Google translate. That’s how I came up with the name Fēngbào, too.”

“So how come Serang didn’t get all torn up in the explosion like everyone else?”

“I don’t need her to be wounded, and maybe she wasn’t as close to the epicenter as the others were. Don’t think about it too much.”

Lisa sat down the weapon, then picked up the bamboo flute. “I’d love to be able to play this thing for real.”

“Robot girls don’t have lungs, genius. I’ve been holding it to my lips then playing back a soundtrack.”

“It helped me with my writing. Maybe you can play that Kill Bill number one more time.”

“You know that was played on a pan flute and not one of these, don’t you?”

“You fake it well. Maybe that’s all any of us can do. I hope I fake my stories well enough to make people enjoy them.”

Back to the office tomorrow, but 3600 words, and a difficult section out of the way is a good day every day.