Something Wicked Presents: The Bow of Hart Saga

Hi, Gang. My Story Empire compatriots are taking our show on the road this week. We try to bring you useful information throughout the year to help with your own writing and publishing efforts.

We write books, too, and sometimes need to do a bit of promo. During this lead up to Halloween, please join us on the Something Wicked tour. You’re sure to find something for your Halloween reading.

It’s my pleasure to open this tour up with P. H. Solomon. He’s here to tell us about his Bow of Hart Saga:

Magic is an ongoing part of The Bow of Hart Saga and Corgren’s part is almost always through the use of spells. At the beginning, it’s revealed how much he’s been shadowing Athson and much more that extends throughout the series and into the third book, The White Arrow. But when the book begins, Corgren is revealed disguised by magic which makes for a good subject for Halloween since he’s essentially in costume. Let’s take a look:

Darkness groped across the western sky, covering the forest city of Auguron. Domikyas paused while closing his shop doors and listened as the evening breeze caressed the towering trees that sheltered the city.

He clenched a fist. They had robbed him of Lucinda.

The portly Rokan merchant barred the windows, sighed, and waddled through the store. Domikyas passed between aisles of Rokan weapons, furs, cloth, and trinkets, his many wares displayed on counters, and entered his office. He stood by his desk, arranged in neat order and set with carved Rokan relief. The merchant shut the door. “Sa vuss tai nomish.”

Domikyas’ short body grew. His pot-belly thinned. The pudgy, clean-shaven face narrowed and lengthened, sprouting a trimmed, black beard at his chin. Bulging eyes sank above a flat nose that pushed forward into a hook, leaving him with a perpetual sneer. His yellow merchant’s smock of fine-cut Rokan weave lengthened and narrowed to fit the taller frame and transformed into blue velvet.

He opened the door to the warehouse, grasped his oil lamp and found, as expected, two men remaining in the building from among his dismissed followers. Luthan stood snuffing through his crooked nose, his brow furrowed at the stinking slave stooping beside him. The latter man wore a cloth tied over ruined eyes while another rag gagged him.

“Is he ready, Luthan?” The Rokan merchant swept past the hulking guard. The blind man’s nostrils flared with his labored breathing.

“He is, Master Corgren.” Luthan yanked the shackles binding the blind man’s hands.

“Bring him.” Corgren stalked away.

“Come, slave.” The guard dragged the cringing figure by the manacles and followed his master.

The blind man shuffled after the guard. Corgren ignored the reluctant step of the slave. A useful ingredient for what was to come, but worthless elsewise. His lips curled. Disgusting creature.

Corgren lifted the trapdoor leading to the cellar. Muted light from a guttering candle threatened to plunge the basement into darkness. The wizard descended the steps, his lantern shedding light on the clutter of boxes containing prized possessions.

Find out more about The Bow of Destiny: 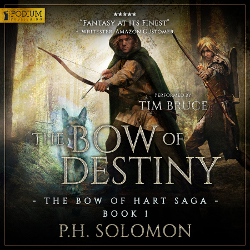 Haunted by his past. Hunted in the present. Uncertain what is real.

Athson suffered hallucinations ever since he was orphaned, including a dog no one else sees. The will in his possession, bestowed in a dream, can’t be real. But the trolls now hunting him are. A destiny, both inconvenient and unavoidable, drags Athson into an unwanted quest that challenges all his assumptions. Can he trust anyone? Sworn to secrecy by his dead father about the bow, Athson wants nothing to do with it. A dragon and a wizard want the bow – and Athson dead. Running from the quest and his destiny are tempting options. Then he finds something unexpected. Will his discovery destroy him before he recovers the bow?

Find The Bow of Destiny on Amazon in e-book, audio and print.

Also in this series:

An Arrow Against the Wind

P. H. Solomon loves reading and writing fantasy of all kinds, especially epic fantasy. If a book has dragons, elves, dwarves, wizards, magic or mythical creatures, it’s in his reading zone. He lives in the greater Birmingham, AL area where he strongly dislikes yard work and sanding the deck rail. However, he performs these duties to maintain a nice home for his loved ones as well as the family’s German Shepherds. In his spare time, P. H. rides herd as a Computer Whisperer on large computers called servers (harmonica not required). Additionally, he enjoys reading, running, most sports and fantasy football. Having a degree in Anthropology, he also has a wide array of more “serious” interests in addition to working regularly to hone his writing. His first novel, The Bow of Destiny was named 2016 Book of the Year by Fantasia Reviews and is the first book of The Bow of Hart Saga. The sequel novel, An Arrow Against the Wind, was released in April of 2017. The third book of the series, The White Arrow, was released during October of 2017. P. H. Solomon also authored the award-winning short story, The Black Bag, which won best published short story at SCWC 2012. P. H. is also a member of Science Fiction and Fantasy Writers of America (SFWA).

Thanks for stopping by today. Please take time to share this post. Whether you’ve read The Bow of Hart Saga or not, please leave you reactions to this scene and the book.

55 responses to “Something Wicked Presents: The Bow of Hart Saga”