Hey everyone. One of my great pleasures is to help my fellow authors with their promotions. Harmony Kent is an old friend and she’s touring her newest book around right now. Please make her feel welcome, and consider using those sharing buttons. I know Harmony would do it for you.

Hi, everyone. Harmony here. Many thanks to Craig for hosting me today. I have a new book on pre-order called FALLOUT, which is a post-apocalyptic dystopia. This novel started out life by playing a little game. I sat and closed my eyes and imagined an empty room … in that room, a vial appeared. A dull orange plastic thing covered in scratches. It sloshed when I shook it. From that tiny beginning, the world of Exxon 1 and its deadly virus was born.

Why is Kaleb so eager to help Priya with the vial?

Why doesn’t he just take it from her?

Why does Priya still trust Kaleb?

Emotions grew around the visual memory like mould. Unwanted and poisonous. He had been but a boy. Young and weak and ignorant. He hadn’t known the way of the world. Not back then. And still, the old feelings held him prisoner so that he could not simply walk away from the woman bleeding out on the dirt floor.

Pity and remorse squashed his logic into a dark corner. He had to help her. The responsibilities of his mission—what they meant for mankind—warred with his desire, his need, to help the young victim.

Duty pulled his left leg toward the exit. Pity drew his right toward the woman. If he didn’t make up his mind soon, he’d end up doing the splits. With a sigh of frustrated annoyance, he squatted by the beaten body again. Only then did he notice what the rat had been chewing on. Her left little finger was missing, gnawed down to the lowest knuckle joint in a mess of bloodied flesh and gristle. 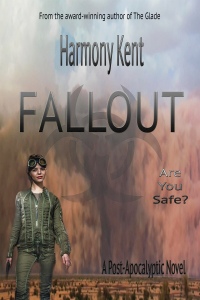 WHEN EVERYTHING FALLS APART, WHAT CAN YOU DO?

The location is Exxon 1, part of a six-planet system in settled space.

Determined to avoid the mistakes of old Earth, the surviving humans avoided democracy and opted, instead, for a non-elective totalitarian system.

A crazy, despotic president releases a nano-virus on the population.

No one was ready for the fallout. It came anyway.

In this post-apocalyptic world, can you stay safe?

After spending around thirteen years as an ordained Buddhist monk, living in a Zen Buddhist temple, and six years after a life-changing injury following a surgical error, Harmony Kent returned to the world at the tender age of forty.

Now, she is famous for her laughter, and has made quite the name for herself … she’s also, um, a writer … and fairly well known for that too. She’s even won a few awards. Harmony lives in rural Cornwall with her ever-present sense of humour, adorable husband, and quirky neighbours.

Harmony is passionate about supporting her fellow authors.

56 responses to “Fallout, by Harmony Kent”