Welcome to this week’s edition of Lisa Burton Radio. I’m your host, Lisa the robot girl, and this week we’re trying to fix a relationship. Our special guest today is Steve. “Welcome to the show, Steve.”

“Thanks, Lisa, great to be here. So refreshing to talk to someone rational for a change. I’m going round in circles with Liesel.”

“Let’s hope we can help you fix that. Why don’t you tell us about how you guys met?”

“I was sitting at a table on my own in the staff canteen when I looked up from a plate of bright-orange chicken madras, to see this woman with lavish Pre-Raphaelite hair beaming down at me. She’d mistaken me for some other guy, but it didn’t matter once we got chatting. I found out later she’d made him up, this other guy. You’ve got to admire a woman who can pull off a ruse like that.

“Anyway, I told her I was new to the area, and looking to buy a house. She seemed so interested, I invited her to come with me to a viewing that Friday. I thought I’d pushed it too far when she said she was busy that evening, but it turned out she had a legitimate excuse. I switched the appointment for the following Saturday so we could go together.

“Although it was only May, it was scorching hot, and the two of us were dressed as if the beach, whereas the estate agent was this stuffy woman in a business suit. Naturally, she assumed we were a couple and Liesel played along. I’d never have imagined house-hunting could be so hilarious.”

“Sounds like a good time. So tell us how you went from being a pretend couple to a real couple.”

“We hung out together when we could over the summer, although I was working shifts so our time off didn’t always coincide. When I put in an offer on that house, I secretly hoped she’d move in with me. But I knew not to pressure her. She’d told me right from the start she was a free spirit. But so was I, or had been, until then. I was just back in the UK after twenty years travelling.

“The day I moved in, she came over with a housewarming present, and we made love in every room in the house. Then one night towards the end of summer, I was squatting on the front doorstep with a reefer and a can of beer, when she showed up in a hired transit van with all her stuff.

“One of the things we’d both liked about the house was the huge cellar. It wasn’t decorated like a proper room but, for our first Christmas together, it was the perfect retreat from the world. All we needed was a mattress, some booze and some snacks. When we finally emerged from our love nest, we didn’t even know what day it was. Hardly knew where we were, as outside it was like a Christmas card, blanketed with snow.

“We had our differences, Lisa, like any couple. But we agreed on the important things. Politics. What a joke my sisters are – the buy-one-get-one-free twins. What a joke overpopulation isn’t. I’ve met far too many broody women in the last few years, more interested in the viability of my sperm than our having fun together. But Liesel was quick to let me know she wasn’t interested in children. I suppose that was part of the attraction.”

“Family life’s not for everyone. It’s good that your goals are aligned. So what’s the problem, Steve?”

“She’s changed her mind. Can you believe it, Lisa? The woman who refused to be tied down wants to start a family! I had my suspicions when I heard her smooching over a baby at her friend’s New Year party. But when we talked about it later, she insisted she didn’t want one of her own. Too sensible, as well as committed to her work. Liesel had big ambitions. Had put in for a promotion and was gutted when she didn’t get it. Sulked for three days and wouldn’t let me near her. Slept all alone down in the cellar. I thought everything was back to normal when she finally came upstairs to bed. But when I reached out for a condom, she batted my hand away.

“Even so, I was sure she’d come to her senses. She’s got her flaky side, and that disappointment hit her hard. But it’s like she’s had a personality transplant, harping on about her biological clock. Now she’s given me an ultimatum: if I won’t agree to start a family, she’s moving out at Easter to look for a man who will.”

“Aww, you poor guy. So, what’s your next step? Counseling? Therapy?”

“Therapy? I’d expect a robot to be above all that wishy-washy Freudian claptrap. You haven’t been talking to Liesel behind my back, have you? Or her coven of friends?”

“Because that’s what she suggested. For me! She’s convinced herself I’m scared of becoming a dad. Just because I never knew my own! I’m scared, Lisa, but not of fatherhood. I’m scared of watching the woman I love disappear in a morass of maternity bras, nappies and pureed apricot rice. She said it herself, early on, she’s not cut out for motherhood. She needs her own space. But it’s like her friends have poisoned her mind.”

“Yeah, well, Jules has had in for me from the moment we met. So I need to get Liesel away from her influence. You know, like at Christmas. If I could get her on her own for long enough I could talk some sense into her. Remind her of what she really believes.”

“I can see that romantic hideaway working at Christmas, Steve, but don’t people like to get out and about at Eastertime? But if it’s what you both want …”

“Thanks, Lisa, I knew you’d see the logic. Now it’s just a matter of persuading Liesel. Or getting her into the cellar regardless. I don’t know why, but she’s refused to go down there lately. But maybe when I tell her you think it’s the way forward …”

“Wait a minute! That’s not what I said.”

“Now there’s a thought! Did I mention that I work in an operating theatre? I’m only an orderly, but I could probably get hold of a bottle of anaesthetic.”

“No, you’re right. I might not get the right dose. But how else am I to get her down there? That’s my only problem. Once she’s there, it’ll be simple to keep her there. There are three super-strong bolts on the door.”

“No-no-no-no. This won’t help you, Steve. You can’t lock someone up against her will.”

“Don’t freak out, Lisa. It’s for her own good. She doesn’t really want to leave me, she’s just got a bit muddled … Actually, that sounds like her coming through the front door, now. I’d better hang up, but thanks ever so much for your advice. I feel loads more confident. In fact, I’ve just had another idea. I’m pretty sure I can get her down there tonight–”

“It appears we’ve been disconnected. I really hope Steve and Liesel get the help they need. To find out if they do, you can pick up a copy of the book, Underneath, by Anne Goodwin. I’ll post all the details on the website after I go off the air.

It might help Steve to get that help, if you all use those sharing buttons today. I doubt Steve will pitch in, but I know Anne would do it for you when your character appears on the next Lisa Burton Radio. 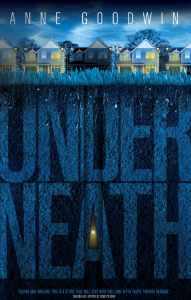 He never intended to be a jailer …

After years of travelling, responsible to no-one but himself, Steve has resolved to settle down. He gets a job, buys a house and persuades Liesel to move in with him.

Life’s perfect, until Liesel delivers her ultimatum: if he won’t agree to start a family, she’ll have to leave. He can’t bear to lose her, but how can he face the prospect of fatherhood when he has no idea what being a father means? If he could somehow make her stay, he wouldn’t have to choose … and it would be a shame not to make use of the cellar.

Will this be the solution to his problems, or the catalyst for his own unravelling?

Intelligent, insightful writing which takes you beneath the surface Books, Life and Everything

Anne Goodwin’s debut novel, Sugar and Snails was shortlisted for the 2016 Polari First Book Prize. Her second novel, Underneath, was published in 2017. Her short story collection, Becoming Someone, on the theme of identity, was published in November 2018. A former clinical psychologist, Anne is also a book blogger with a particular interest in fictional therapists.

67 responses to “Underneath, on #LisaBurtonRadio”