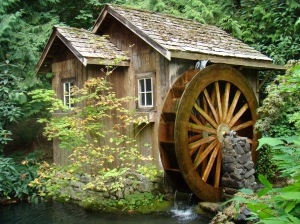 The articles are pouring in rapidly now. We had a drought of decent grist for the mill for months. This time I am holding five new articles. This post will address three of them, and I’m fairly sure the next Idea Mill won’t be long in coming.

For the new readers of these posts, I set a bunch of push feeds to send me articles that relate to my interests. Some of them get pretty repetitive, but some of them feed my Muse. These can lead to new stories, or morph into elements in those stories. I share them here in hopes of kicking your own Muse in the pants.

There is an added bonus of that small slice of reality. I like to base my speculative fiction in as much reality as possible. That way, when I ask for a leap of faith, it’s isn’t a death defying jump. Weaving a few of these things into a story helps set the stage for that leap.

Here we go. Our first article is a strange medical phenomenon. It seems a man became a father. A DNA test proved he was not the father, which is something that happens. What is weird is that his brother fathered the child. (Also been known to happen.) Where it goes completely off the rails is that he has no brother.

To make this even better, the baby was conceived in-vitro. This adds all kinds of intrigue and blame to a story. The poor woman was impregnated by someone else’s sperm. Except that isn’t the case here. It turns out the man is a human chimera. At one point, he was a twin. His twin brother was “absorbed” and fused with the remaining fetus. The father of the child is an amalgamation of two different people. The parts that father babies actually belonged to his secret brother.

The article gives hints of others in similar situations. It even gives some interesting possible physical indicators that can play right into character descriptions. Read the story here.

This alone would make for a great family drama. “You’re not my father,” takes on a whole new meaning from a bratty teen. Because of who I am, I would take it in a different direction, somewhere out near the Twilight Zone. Have the guy go through the stages of grieving. Let the brother assert himself in a split personality kind of way. Maybe the brother is a better man, a better provider, a better lover. Drive the poor guy into a deep hole. Find a way to let readers know the poor guy is being absorbed, just like his brother was.

What would you do with it?

Next we have The Radium Girls. The United States Radium Company was a highly successful business about a hundred years ago. They made clocks, watches, and gauges for aircraft. Their claim to fame was the fact that the numbers and pointers glowed in the dark. This was the result of radium based paint. The Radium Girls were factory workers who applied the paint.

I remember the old-timers in my family being deathly afraid of wristwatches that glowed in the dark. This is because radium is a deadly radioactive substance. The Radium Girls were told it was safe, and encouraged to lick their paintbrushes to obtain finer points for detailed work. The girls even played with the paint, applying it to dresses, fingernails, etc. I can just see one of them painting a radioactive seam up the back of her legs to simulate nylons of the day.

Of course, this didn’t end well. It led to a giant lawsuit, destruction of the company, and a whole lot of pain and suffering.

The fact that this happened, means the research material is out there somewhere. Here is the article, but it’s one of those clickbait style things. This builds a solid foundation for that leap of speculative faith we were just discussing. Want to write a superhero story in a dieselpunk environment? How about Radium Girl? She cleared the trenches in France, and cured trenchfoot all at the same time.

There have been some radioactive assassinations in fairly recent history too. Maybe you prefer more of a radioactive Unibomber type story. Radium could be a basis for that too. Glow in the dark chocolates anyone?

We’re going to wrap this up with the most dangerous object on Earth. It’s called the Elephant’s Foot, and it’s a blob of material from the Chernobyl meltdown. Spend 300 seconds around it, and you have two days to live. This thing is so hot it melts concrete and sand. Hey, it will get less dangerous over time. In 100,000 years maybe they can paint watch faces with it. Read the article here. I should mention the last two articles have some interesting photos.

This is like a gift to thriller writers. Someone making off with this thing, or even a piece of it, gives you an automatic maguffin for your super spy to chase after. You wouldn’t even have to sell the dangers very hard. You can start right out kicking ass and bedding babes on your way to preventing a nuclear ice cream truck from driving through the city. Spreading radioactive love as it drives past schools and call centers. (Okay, maybe park it overnight by the call center, and a timeshare office too.)

I’ve done my part for radioactive murder. Reference Practical Geology in my second Experimental Notebook. Maybe granules of this thing make a good catalyst to create lush green worlds out of distant space rocks. We fire them off today, and by the time colonists arrive it’s a garden of Eden. Maybe Radium Girl brings it to life and she and her blob save humanity from the terrorists. What would you do with the Elephant’s Foot?

Part of these posts involve me coming up with a shtick using all the stories. I’m thinking thriller today. Our hero’s mother was one of the original Radium Girls. This caused a problem with her pregnancy, and our hero has the pale markings of a human chimera. Maybe he has two different colored eyes too.

After a long military history, he settled down and started a family, only learning of his chimera status after his child was born. This leads him down a rat hole of self doubt and split personality issues. He’s recalled into service when terrorists get their hands on the Elephant’s Foot. He embarks on a global chase for the maguffin, all while battling with his internal brother, who turns out to be the extra manliness he needs to save the day.

What would you do with these snippets of history and news?