We just rolled in from our first 2017 camping trip. We left mid-day friday, because setting up in the dark sucks. Here’s Otto enjoying the sunset while dad enjoys a toddy. 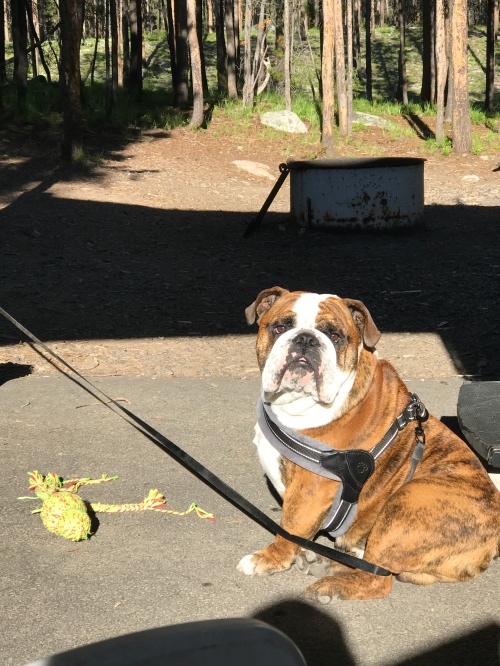 I should probably crop this one down and save it somewhere. He almost glows in that afternoon sun. I didn’t get good pictures of the girls. They move around a lot, and brindle colors are like camouflage in the forest.

The next morning, the weather changed. It rained almost all day Saturday. Otto decided to rest his big, heavy, head on the table while I had coffee. 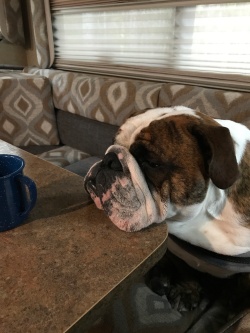 The plan was to hunt morels, my favorite mushroom. I really had no idea when to go after the goofy winter we had. We went a week later last year, and were almost too late.

Campgrounds have to be booked well in advance, and we reserved our site in January. I told Old What’s Her Face, we were going come Hell or high water. Turns out high water wasn’t too far off. The Payette river is always a violent white river, but the waves were as high as the pavement as we drove by this time.

My wife was cold all day, and decided to stay at camp. It turned out later that she must have gotten some kind of bug. She was thrilled to get some down time for reading though, so that’s a win for her.

I headed out on my own, and went directly to my best spot. I admit, I was starting to have some doubts about my chances about halfway there. 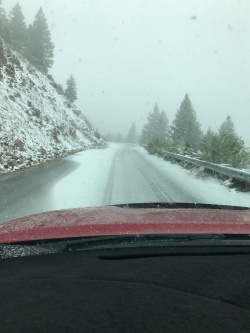 Landmark summit was white with snow. My spot is down the other side, so I went there anyway. I got lucky, because it was well below the snow line.

This isn’t to say the hunting was any good. I managed very few, but in true form; find one and there is always more than one. I gathered six big ones at one point.

When you hunt morels, you walk very slowly and look down. They aren’t colorful like Easter eggs, and I’ve even found them between my feet before. This method of hunting is why I nearly stepped on an elk calf hiding in the deadfall.

Let me tell you, when you’re all alone, in bear country, and something the size of a small pony jumps up under your feet, it wakes you right up.

False, or snow morels were out in abundance. These look almost brainlike, and vary from tennis ball to softball in size. You don’t eat this kind. There are at least three in this photo, and even they are hard to spot. 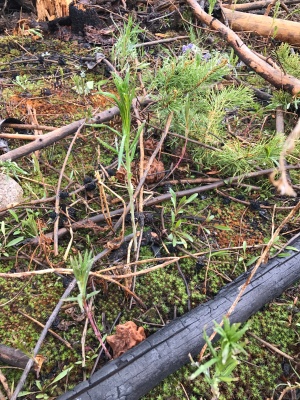 I’ve had times when I could fill coolers with good morels, but it’s been a few years. This year, I managed about half of one net bag. I have enough for a couple of nice steak toppings, or a couple of outstanding omelettes, but that’s it.

I heard they were finding them by the truckload out of Idaho City. That’s where the big fires were last summer. I just like the area we went. I like camping there, I like the mountains. I can always find a few this time of year, but I may have to make a day trip to Idaho City to keep my supply up.

Mushrooms are really a mycelium that lives underground. Remember these are a fungus, and not a vegetable. The mycelium looks like a giant cobweb. To keep things simple, I’m going to call them roots.

The edible part of any mushroom is it’s reproduction attempt. It’s not a lot different than an apple in that regard. Morels have one strange habit that a hunter can take advantage of. They invest a lot of time growing in a particular piece of ground. When that ground is damaged somehow, they panic and send up more mushrooms in an attempt to reproduce as their last act on earth. I think they’re drama queens, because the underground system can be huge, and there is one honey mushroom in Oregon that’s documented as covering several counties. Still, their strange habit is a bonus for a hunter.

Fire is the big one that everyone knows about. Deadfall trees do the same thing, and that’s where I look. I’ve found them down in the root balls before, but they’re usually ten plus feet from there. Remember this root system is pretty big. Someone blades a dirt road, I look there too. A woodcutter gets stuck, or leaves deep tire ruts in the woods, same thing. I spotted this little beauty at a deadfall. 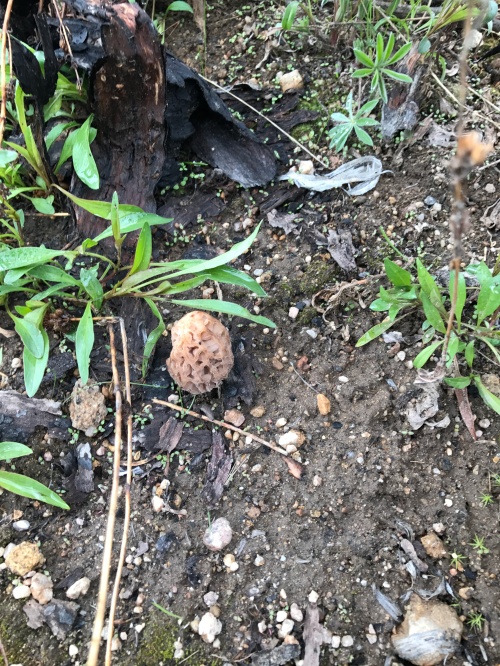 This one appears to be a yellow morel. I also found black ones, and few of the little grey fire morels. They’re all good eating, and I wasn’t picky. I mentioned my stretchy net bag a few paragraphs ago. This is me attempting to be a good steward of the resource. Mushrooms don’t have seeds, they have spores, and distributing them is the goal of the fruit. I carry a net bag in hopes that if they are dropping spores, I will leave those spores on the forest floor.

Otto and I went on a couple of big walks through the campground when I got home. He did his “bulldog ambassador to the world” routine, and met quite a few people and dogs. He absolutely loves everyone. It was fun meeting another bulldog in camp. She was white, and had on a cute little raincoat. It was raining, so I didn’t get a picture of them.

I don’t want the girls to get left out, but I didn’t get a good photo. Here is some kind of bulldog version of tug-o-war using a stick. They might call it push-o-war, since they’re backwards. 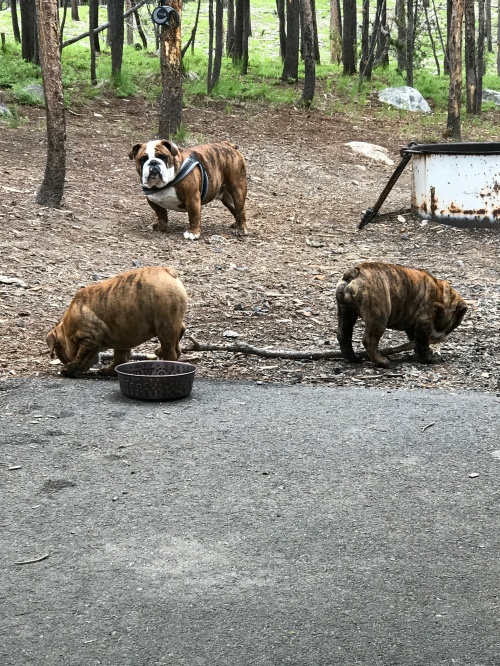 I hope all of you had a great weekend.