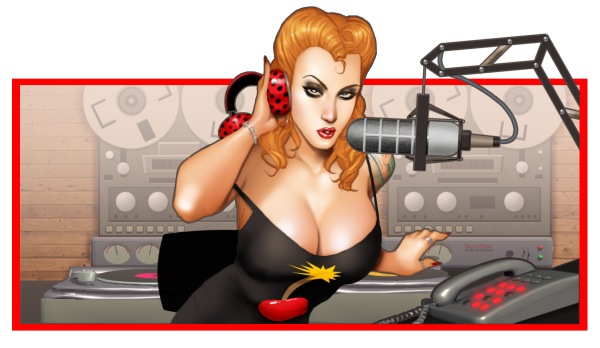 Welcome to another edition of Lisa Burton Radio, I’m your host, Lisa the robot girl, and my guest today has a very important job. In America we would say he’s a stuffed animal, in other places they would refer to him as a plush toy. “Welcome to the show, White Bear.”

“Hi, Lisa. It’s a pleasure to be here. Thanks so much for choosing me to be your first stuffed animal interview!”

“Pleasure to have you. You’re best friends with someone named Angel. How did you two come to meet?”

“As far as I know, before meeting Angel, I always lived in a doctor’s office at Shriner’s Hospital in Tampa, Florida. I spent most of my time at the computer doing research or hanging out on a bookshelf. Lots of kids came in and out of that office, but they never paid any attention to me. One day, a little girl named Angel came to meet my doctor. She needed a special procedure to release the chord in her spine so that she would be able to walk. Angel was so little and only said a few words, but as soon as I saw her, I had the feeling she was going to change my life. While the doctor was talking with her mom, Angel looked right at me and winked! I winked right back and she started giggling. The doctor must have realized that we were meant to be together because that very day I left the hospital to live with Angel in my forever home.”

“Sounds to me like you guys really hit it off.”

“We sure did, Lisa, from the very beginning. I started hanging out with her during dialysis and was even allowed to stay with her during procedures, tests and surgeries. Actually, we did practically everything together. Oh, there was this one time we were supposed to be cleaning her room and we started having a pillow fight. That’s when I fell of the bed and landed on the corner of the dresser. I ended up with a cut on my arm and lost quite a bit of stuffing. Angel’s mom had to re-stuff my arm and sew me back up. Angel stayed with me the whole time. I still have a bandage sewn on my arm and it reminds me every day to be a bit more careful. But you know, no one can control every situation they end up in.”

“So you and Angel must spend quite a bit of time in the hospital.”

“That is true. Since I have known her she has had two more back surgeries, one reconstructive surgery and so many procedures that it is hard to remember. Once she was activated on the kidney transplant list we knew that life was going to change. We made lots of plans like going swimming, eating chocolate, and going to Disney World. You can’t imagine the lists we made. Then when we least expected, they got the call. A kidney was found for Angel. We hurried to the hospital to get Angel settled in and prepared for surgery. I was with her all the way to the operating room. That’s when the trouble started. When they transferred Angel to the OR, I was left on the bed in the hallway. By the time I realized what was happening, I was rolled up in the blankets and tossed down the laundry chute.”

“The laundry room must have been terrifying.”

“Actually, tumbling down the chute was kind of fun. Even landing in a big laundry bag wasn’t so bad. It was when I realized that I was being taken outside to a laundry truck, that I started getting nervous. No one knew where I was and I had to find a way to get back to Angel before she woke from surgery.”

“Well, spinning around in a giant washing machine with soap bubbles splashing in my face made it hard for me to see what was happening. At one point, I was tossed towards the front of the machine, right against the glass window. As I was spinning upside down I saw a man with a big smile standing right in front of me…”

“White Bear, I really hope you can get back to Angel before she wakes up. I’m honored to have you on my show, and I want to challenge our listeners today to donate new plush toys to a local children’s hospital. They can work in children’s wards, on ambulances, and many other places.

“You can read more about White Bear in White Bear’s Big Adventure, by Marie Cheine, and I’ll add all the details to the website. Don’t forget to use those sharing buttons today, Marie and White Bear will appreciate it, and they’ll do it for you when your character appears on the next Lisa Burton Radio. 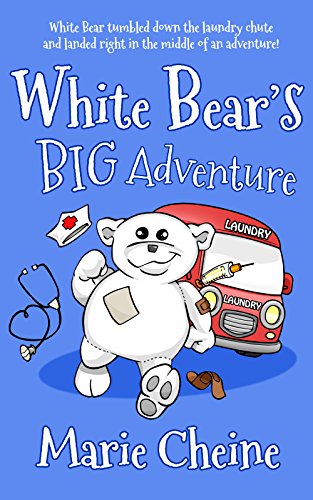 Blurb:
White Bear knows his way around hospitals. He lived in one for a long tine before going home with his best friend Angel.
But one day, White Bear got tangled up in a pile of hospital sheets and ended up where he never expected to be. Will he find his way back to the Pediatric ICU before his best friend wakes up? 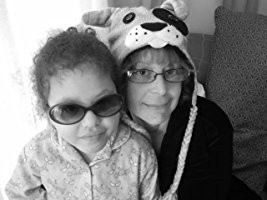 Marie was born in the Bronx, New York, but was raised in Queens and on Long Island. When she was three her mother took her to the Queens Library at Bellerose for Library School. There she sat quietly with all the other young kids and listened to the librarian read stories aloud. That and the bedtime stories her parents to her every night until she was old enough to read herself, began her life-long love of storytelling and writing.

Fast forward Tampa, Florida where she has been the patient coordinator for the Tampa Bay Adult Congenital Heart Clinic for almost 25 years. During this time, she graduated from Thomas Edison College where she majored in English and later earned a Master’s Degree in Interdisciplinary Studies (Literature and Writing) from Western New Mexico University. In between, she got married, had a son, adopted numerous cats and two dogs and became a grandmother.

Meanwhile, her niece was born with a rare set of birth defects causing malformations in many body systems known as VATER or VACTERYL Association. This included a condition requiring a colostomy immediately after birth, one completely non-functioning kidney and one that soon required dialysis and eventual kidney transplant, a tethered spine and scoliosis requiring five surgeries and a heart condition called Wolfe Parkinson White.

Following a particularly long admission when her niece was hospitalized for almost an entire year, Marie formulated the idea of creating a series of books dedicated to children with serious and life-threatening illnesses. White Bear’s Big Adventure is the first in the series.

You can purchase White Bear’s Big Adventure at this link.

60 responses to “White Bear, on #LisaBurtonRadio”