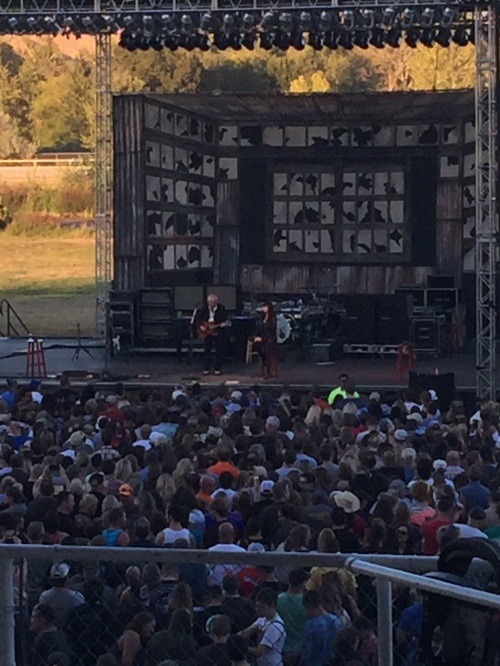 Alright, so my picture is lousy. It's mostly to prove I was there. We went to the Idaho State Fair tonight. We had a whole evening planned around this, but we got there late. We only had time to grab a lemon aid and get into a half mile line.

I have a thing for great vocalists, and Pat Benatar is absolutely amazing. She's older than I am, and can still hit those high notes. She hits them with power too, still. That huge voice in such a tiny woman is kind of impressive. We got there at the end of the line, and so we had to sit farther back than I would prefer. There was no problem hearing though, like most concerts.

In an age where anyone can use auto-tune and record a song, I find it refreshing to know there are still a few that don't need it.

We never got to go see the bunnies and roosters, because it was late when the show broke up. (They were asleep.) We only had time left for a quick gyro to eat as we walked to the car. The crowds were huge, which isn't one of my favorite things. It took a while to weave through, but it was well worth it. Getting to see someone that good, is always worth it.

One of the best date nights ever. Back to the task list tomorrow.