Today is the day

Well, it's one of the days. My newest book The Experimental Notebook of C. S. Boyack II is now available for purchase on Amazon. It's a pre-sale, and the books will deliver on August 31st. That is the other day.

I wanted to do a short pre-sale, but Lisa my robotic assistant must have messed up. Let's talk about the actual book. 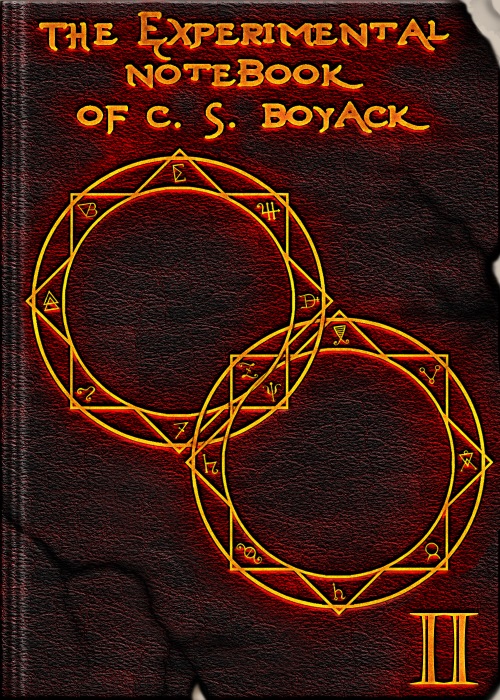 This is similar to the first Experimental Notebook, in that it's a collection of short stories and micro-fiction. It's also similar in that it's priced at 99¢.

I decided to make the alchemy wheels into a kind of theme. The first Notebook has one, this book has two, and should there be a third volume it will have three wheels. That way the covers are similar, but also unique.

This book has some science fiction, some paranormal, and one that barely qualifies as fantasy. I love fantasy, but don't write quite as much of it. It also has two stories that don't have any speculative element. I've taken to writing short stories and micros in my spare time, then stockpiling them. When I have enough, I bundle them into a notebook.

Part of me worried about including some tales that didn't have the speculative element in them. So this book has more stories than the first one did. That way, you get the same deal and can consider those stories as free extras.

I revisited Pete Rogers, who first appeared in Will O' the Wisp. He's all grown up now, and trying to make a life for himself. I also revisited Jason Fogg, the fellow from the first notebook who can turn himself into fog. In this story, Jason is investigating a fishy situation.

This book has a few stories that are a tribute to the pulp era as well. People usually think of crime fiction, or romance, when they think of the pulp era. There were plenty of pulp science fiction and horror stories too, and I hope I did them justice.

The stories are also experimental, thus the titles of the books. I tested out the epistolary style in one story, and even tried a longer monologue to relay one story.

The first notebook included an intermission where I address the reader. It proved to be popular, so I did it again in the new book. I suppose it's become a theme now too.

So there you have it. For 99¢ you get fifteen conveniently sized stories. Perfect for coffee breaks, commuter busses, or when those Pokemon are just too elusive. You also get an excerpt from the ever charming Clovis right out of my last novel, The Playground. At that price, even if only one trips your trigger, I think readers are getting their money's worth. If they all ring true, it's a steal of a deal.

Early sales are important, because they credit on the day the book delivers. That can help me get onto one of the Amazon lists. Please consider pre-ordering and helping out. I included the link up above, but I'll include it again in a convenient tweet worthy paragraph:

Pick up the newest Experimental Notebook of C. S. Boyack on presale today. It's a steal at 99¢ http://a-fwd.com/asin=B01KENADN6

I just tested it out, and there's even room for your favorite hashtags. Simply copy and paste.

I planned on working on more short fiction today, but I need to address some other things. I need to track down a Goodreads librarian and add the book over there. I should put it in my blog sidebar, make some Twitter worthy art to promote with, and assemble my street team. I'll probably turn on the street team bat-signal on Wednesday, but I can write the post today.

59 responses to “Today is the day”