As a member of the Rave Reviews Book Club, I occasionally get to showcase some awesome authors here. Today Micki Peluso is here to talk about her personal journey, and her book The Whippoorwill Sang. Take it away, Micki.

Facing My Fear of Public Speaking

I have always had a fear of public speaking and being the center of attention. That said, while other authors may enjoy the thought of speaking in front of strangers, for me it was about as much fun as facing a firing squad. My local Red Hat Ladies Club cajoled (forcefully pushed) me into doing a speech and book signing at a local restaurant. Panic set in as all kinds of catastrophic phenomena settled in my gut like a bag of cement.

The day arrived way too quickly but I’d gathered a few helpful hints from other writers. One told me to picture the audience naked. Well, I tried that first and now have a fear of naked people. Red Hat Ladies are not in their youth. Another good idea was to speak while focusing on only one person. That seemed logical since the room full of faces made me dizzy. The woman I chose began to twitch after ten minutes or so, broke into a sweat and finally got up and rushed from the room. I survived and relaxed when sitting at a table and signing my books during the luncheon.

The president of the Red Hat Ladies Society, called to tell me we were going to do a local cable TV spot in a few days. I considered packing fast and heading out of town. But there was no way I could avoid it. They were trying to help promote my book, which was a generous thing that deserved my thanks, not my cowardice. The morning of the live interview, I awoke to an attack of allergies, body aches, a sick stomach and every other ailment my subconscious mind could conjure up. I put on a false bravado and drove off into my worst nightmare. My husband, daughter and I got lost finding the place, in spite of Tinkerbell, our sarcastic GPS system. I was sure I’d get a reprieve at that point. Then a kind man gave us directions and I soon walked up the steps into my personal ring of fire.

The TV host had invited three other women to sit at a table much like the television show, “The View.” All had suffered a criminal loss of some kind. As the camera man called out, “Three, two, one,” it felt like I was having an out of body experience. I could see my husband and daughter in the small audience reserved for friends and family. That didn’t calm me as both can be my harshest critics. I avoided looking at the TV screen showing us live. God must have heard my morning prayers because I became completely detached from myself throughout the half hour program.

My family assured me that I gave a calm, cool and professional performance. I remember nothing, except for the blessed words, “Cut, we’re off the air.” Whew! I did it and my book was displayed on the screen, along with the interview. I’d helped fulfill my death bed promise to my dying daughter, Noelle, 26 years ago. I breathed a sigh of relief, quite proud that I’d faced my fears, thinking I’d never have to do this again. But no . . . .

The MADD organization I’d recently joined asked me to speak to one of the local school PTAs, as a victim of a DWI related death. I managed that due to the caring audience, many suffering losses of their own. I sold books at the PTA to interested parents, as we exchanged similar stories. Becoming involved in their losses changed my terror to empathy, making it a bittersweet evening. Will I ever get used to public speaking? I don’t think so, but I’ve learned to interact with my audience which helps make it an more enjoyable experience. 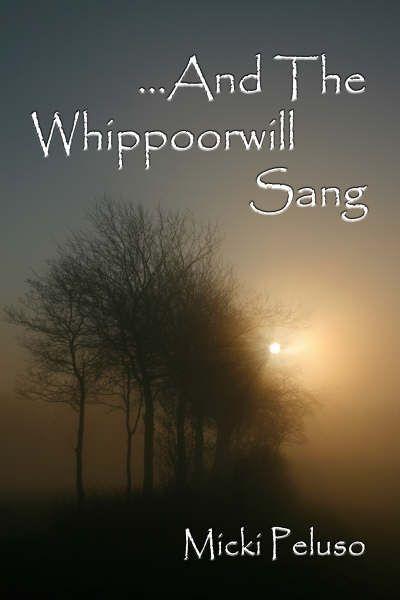 Micki Peluso began writing after a personal tragedy. This lead to a first time publication in Victimology: An International Magazine and a career in Journalism. She’s freelanced and been staff writer for one major newspaper, written for two more and has published short fiction and non-fiction, as well as slice of life stories in colleges, magazines and e-zine editions. Her first book was published in 2012; a funny family memoir of love, loss and survival, called, . . . And THE WHIPPOORWILL SANG which won the Nesta CBC Silver Award for ‘Writing That Builds Character’, won third place in the Predators and Editors Contest and first place for People’s Choice Monthly Award. This book is close to her heart since it’s a deathbed promise to her dying child. It has the humor of ‘Cheaper by the Dozen,’ with the heart of ‘To Kill a Mockingbird. Some reviewers liken her writing to a cross between Erma Bombeck and Harper lee. She has over a dozen short stories in ‘Women’s Memoirs’, ‘Tales2inspire’, and ‘Creature Features’. Two of her short horror stories were recently published in an International Award winning anthology called “Speed of Dark.” She is presently working on a collection of short fiction, and slice of life stories in a book collection called, ‘Don’t Pluck the Duck’, due to be released in late 2017. Her first children’s story, ‘The Cat Who Wanted a Dog’ will be released in June of 2017. Author Peluso is a multi-genre and speculative writer who plans to tackle novels next.

To learn more about Micki Peluso, or to purchase her book, …AND THE WHIPPOORWILL SANG,