I've been almost completely out of touch this weekend. I had a two-bar cell signal, and using that for Internet access wasn't worth it.

I took a book with me, but never got a chance to read it. The timber, the smells, time where it's just my wife and I was too precious.

Otto had a great time out camping. We stayed in Ponderosa State Park, and all pets must be on leashes. He's never been on one, and this posed a tiny problem. What kind of leash to you buy for a puppy with no neck? 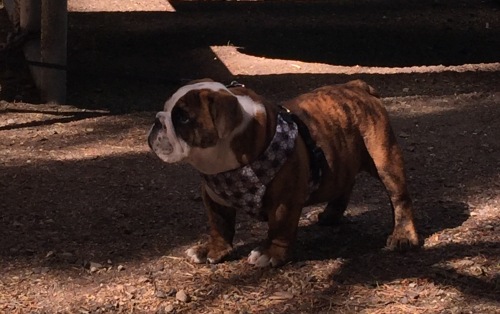 We opted for a harness and one of those retractable leashes. I expected crying and rolling on the ground, accompanied by chewing on the harness.

Otto likes it. He wore it proudly even when I called it a bra.

The leash is another matter. It falls into the category of something he can get into his mouth. A bit of scolding, and he behaved himself with it too. 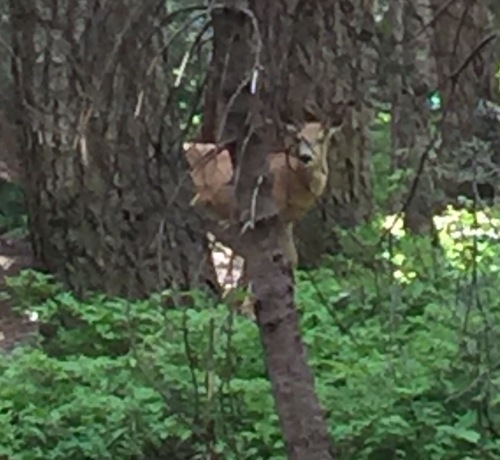 This little doe visited camp on Friday night, and Otto didn't even see her.

There were plenty of dogs around, and since they were leashed, the deer never had a problem at all.

Otto was pretty popular. We had people coming to our camp all weekend to see the puppy. It seems like everyone had a bulldog, wants one, or knew someone. He was excited to meet a bunch of new friends.

Our mushrooming trip was a flop. Summer is too far along this year. This is traditionally a great week, but the season is different. Otto enjoyed splashing around in the stream. He'll be getting a bath in a few minutes. 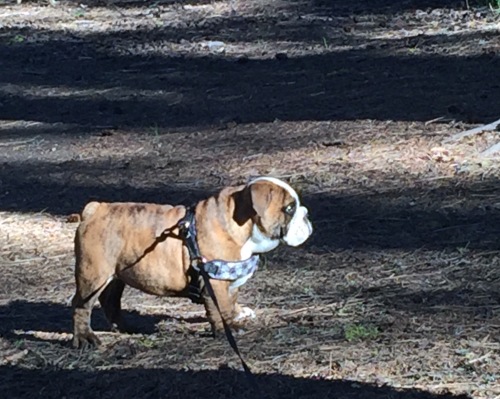 We had a bit of an issue when the leash reached the end. He didn't care about the harness, or the leash, but when the leash limited how far he could go, he pouted.

This is his pout face, and he refuses to look at me.

The deer came back this morning, and this time she came right into our campsite.

Otto saw her this time, but he kind of froze in place. He has no idea whether deer feed on Bulldogs or not.

The gigantic boxer next door had no reservations. He barked at her, so she left. He was nearly as big as she was, and I've never seen one that big. He was a nice, well behaved, dog.

The trip home was pretty boring for Otto. He knew the fun was over, and it was snooze time. I only wish it was for me too. 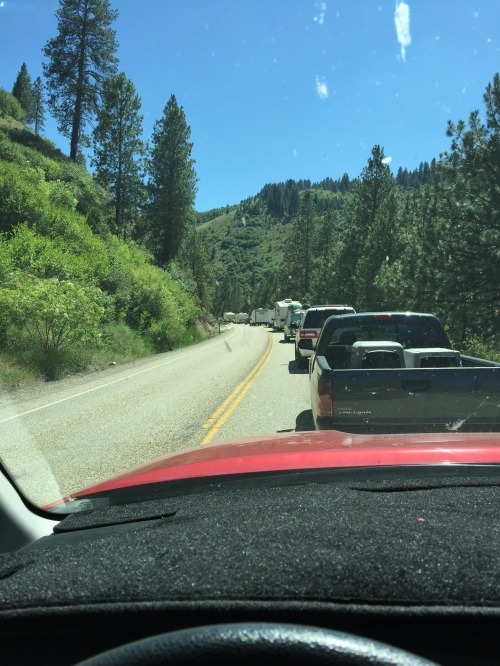 This was my view for over three hours today. There was a three car pileup, with a fatality. So we sat. I had to idle and keep the air conditioner going the whole time.

Otto can be kind of heat sensitive, but I'd be lying if I said my wife and I enjoyed it too.

I am pretty sure traffic backed up for over thirty miles.

I need to get back to all the stuff I neglected this weekend. I know I've missed some of your posts, and I'll try to catch up.

I've also sworn a vow that I will not attempt any new writing until I finish reading that book.

Age has pulled a cruel trick on me and my concentration. I caught myself reading the same page, even the same paragraph over and over again. It doesn't take much to cause this. The Raven two trees over, the dog in the next camp, a kid petting Otto. My concentration is shot.

I used to read while the television ran. Radio was no problem, and I liked some background music. I could read and carry on a conversation with my wife. Those days are over. If I have to backtrack that much, I need to find a better time to read. I will, but I won't set any other goals until I finish. This I swear.