The Phoenix Project by D.M. Cain

The brand new edition of dystopian, psychological thriller The Phoenix Project by D.M. Cain was re-released on December 11th. Originally published in May 2014, this new Booktrope edition has had a complete editing overhaul plus a stunning new cover design.

5 interesting facts about The Phoenix Project by D.M. Cain

As part of the re-release of my psychological, dystopian thriller The Phoenix Project, I decided to let my readers in on some of the secrets behind its conception.

The protagonist of The Phoenix Project, Raven Kennedy, is on a glorified death row within Salverford prison for the terrible crime he committed. In the original idea he was innocent and had been framed and that’s why he was in prison. (As soon as I began writing it, I realised it worked better if he was actually guilty!)

The horrifying ‘dark room’ in The Phoenix Project (a pitch-black sensory deprivation cell) was inspired by a visit to the Terror Haza in Budapest—a museum dedicated to the fascistic and communistic regimes that operated from the building. In the cellar of the Terror Haza are the old cells used to imprison and torture inmates. For research purposes, I crawled inside a very low cell and shut the door, casting myself into total darkness. It was terrifying and claustrophobic, and I only lasted five minutes in there, but it gave me an idea of what it would be like to be in one of those cells.

Raven Kennedy from The Phoenix Project actually started life as the same character as Vincent Wilder from A Chronicle of Chaos (even though Raven is a good guy and Vincent is the mega-villain of my Light and Shadow Chronicles series!). The first book I started to write had a character called Vincent (he wasn’t quite the same character as his later incarnation) and I developed his character in two ways – drawing upon his negative traits to create the later Vincent, and his redeeming characteristics to create Raven.

There is a scene in the book where Raven and a few other characters take part in a high-pressure televised interview. In order to prepare for this and make it seem natural, my husband and I acted it out and recorded the interview! I played Raven and my husband played the other characters, and I then played the tape (yes, tape!) back and used it to write the scene. I still have that tape in my collection of books etc!

The book is available to buy from a wide range of digital and paperback distributors:

D.M. Cain is a dystopian and fantasy author working for US publisher Booktrope. She has released three novels: The Phoenix Project – a psychological thriller set in a dystopian future, Soren – a middle-grade fantasy, and A Chronicle of Chaos – the first in a dark fantasy series. She is currently working on the next novel in the series, ‘The Shield of Soren’, and a novella to accompany it.

D.M. Cain is also a member of the International Thriller Writers and is one of the creators and administrators of the online author group #Awethors. Her short story ‘The End’ was published in Awethology Dark – an anthology by the #Awethors.

Cain lives in Leicestershire, UK, with her husband and young son, and spends her time reading, writing and reviewing books, playing RPGs and listening to symphonic metal. 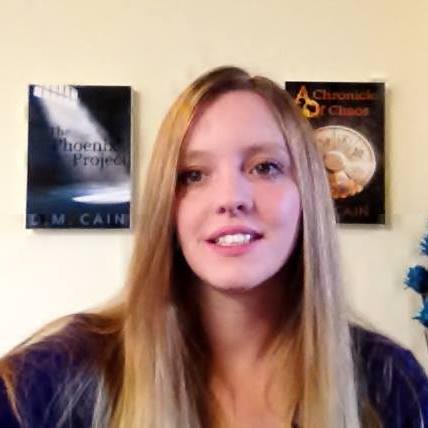 To be eligible to win one of these sets, merely leave a comment on any stop along the tour, including this one and you could be one of our two lucky winners!!!

22 responses to “The Phoenix Project by D.M. Cain”