Looking out my window

I work in downtown Boise, Idaho. I’m fortunate to have an office alongside a small stream. There is an abundance of wildlife in Boise.

Over the years, we’ve had raccoons, foxes, coyotes, and abundant wildlife. When I can, I try to snap a quick photo, but they are usually too fast for me. (particularly the foxes)

There was a mink playing in the snow outside my window last winter. I was so fascinated I never even reached for my phone. Oops. The beavers and muskrats wind up being a blip in the stream on a photo.

I have a few shots of the wood ducks and geese. The weeds are tall along the stream right now, but that will change after the first big snow. We get many blue herons and kingfishers. I have one photo of a white mallard drake that flew in with a group of the normal version. He even had the curly tail feathers to indicate his being a male.

Yesterday a big mule deer buck walked up and looked in my window at me. I slowly reached for my iPhone but he wasn’t posing. He took off, but wasn’t quite quick enough. While this isn’t the view I had originally, it’s good enough to share. Nice big antlers on him, and he looks very healthy. He cleared a six foot fence like it was nothing just outside this frame. 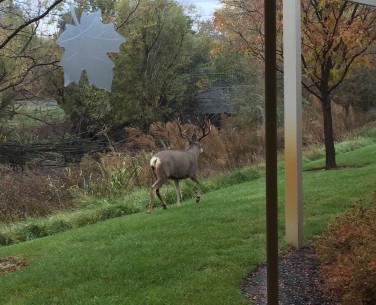 I’m sure he’s on the search for does this time of year. I see them all the time, but he was a rare treat. I even saw a whitetail doe in the parking lot one day.

41 responses to “Looking out my window”