Welcome to My Nightmare

Last night fulfilled a bucket list item for me, kind of. I’m not a huge believer in bucket lists, but I’ll just say I’ve wanted to do this for a long time.

The final tour for Motley Crüe came to Boise, and my wife wanted to go. I moaned about the ticket price, and the fact that I’d already been to one of their concerts. She said, “But Honey, they’re on tour with Alice Cooper.”

That was all I needed to know. We bought our tickets about six months ago. Last night was the night. 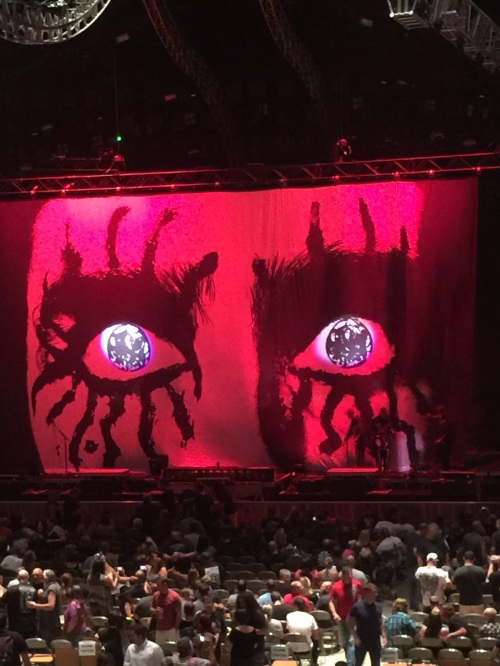 Waiting for the show

Alice Cooper was phenomenal. I first stumbled across him in the early 1970s, and my eight track player was always loaded with one of his tapes. I’ve always heard that he put on the best, and most theatrical live shows. Until last night, I’d never seen one. 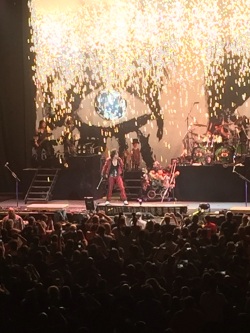 I Googled it, Cooper is 67 years old now. I wish I had gone out of my way to see him sooner. It would have been worth a trip to the coast, or Phoenix to take in his show.

He’s had a long career, and the show was a mixture of older and newer music. He chose well. I still lamented the songs I didn’t get to hear.

I never got to play with the Black Widow, or Go To Hell, there was no help from Nurse Rosetta, or a trip to the Quiet Room.

There are just too many songs for him to cover them all in the scope of a concert. I still knew every song, and had a great time.

His choices ran the gamut from oldies like Under My Wheels and Eighteen, to his newer hits like Poison and Feed My Frankenstein. 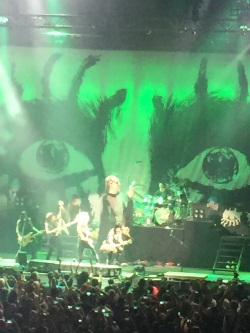 How could he not include Frankenstein. It just screams to be part of a live show. This included some cool electrodes, and a fifteen foot monster running around stage chasing the band members. My picture is crap, but that’s Frankie behind the band members. That ought to give you an idea of scale.

I may have been to over a hundred concerts in my life. I’ve seen everything from country to acid rock. There are some things that become staple items. I’ve seen fog, lasers, fireworks, and all the usual things before.

This show had swords, straight jackets, electrodes, a working guillotine, and a fifteen foot monster. (Did I mention the monster?)

I am one happy dude today, and I bought the tee shirt. I’m going to spend a portion of my day downloading those songs I didn’t get to hear last night.

31 responses to “Welcome to My Nightmare”