These titles are starting to sound like the sections in Monty Python’s Meaning of Life. I did it to keep the posts in order.

This is where the journey ends. These last cards in the Major Arcana can also help with stories, but not usually the kind I write. I call the blog Entertaining Stories for a reason. I’m more about blowing crap up than ascending to a higher plane. This doesn’t mean there aren’t some good stories in this area, and you might be writing one right now.

Just in case someone finds this a year from now and wants to see the others, here are the links:

Our fool has become a pretty mature fellow at this point. In my mind, the last three cards are reserved for tales of absolution. I remember reading Siddhartha in high school, at gun point. Those are the kind of tales we’ve moved into.
I’m not saying they’re bad, mind you. I just didn’t see any phasers, katana, or dwarves in them. 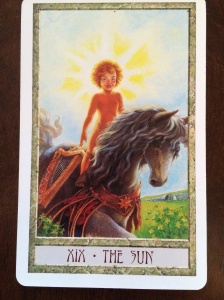 The next phase of the journey is called the sun. Words to describe the sun are: wonder, contentment, happiness, vitality, and innocence.
The sun is usually represented as a child on a white horse riding with the radiant sun at his back, while carrying a red flag. My Celtic deck is close. I wouldn’t exactly call this horse white, and the kid has a red harp. If you get the idea of rejuvenation and a fresh start, that’s the main point.
In my mind he isn’t quite there. The fool is still traveling. This is the point where the confusion of the moon clears and the fool moves forward.
I suppose it could be that moment in The Natural when Roy Hobbs wakes up in the maternity ward. His best girl is there with him, and he doesn’t know what he’s going to do. The instant he decides to play one last baseball game is The Sun. 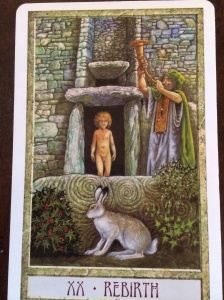 The next card is called Judgment. I don’t know why my deck chose to go with Rebirth, but there you have it. The standard card has an angel blowing a trumpet while people rise up from graves. My card has a trumpeter and the child emerging from a crypt.
This card symbolizes the St. Peter moment before the pearly gates. It’s the resurrection story. Our fool is something new now. Words to describe this card are: Judgment, rebirth, absolution, redemption, salvation, and renewal.
The old fool is gone. This new fool has excellent judgment and is ready for whatever comes next.
I don’t read, or watch, a lot of highbrow stuff. The example that works for me is Bruce Wayne giving up the billionaire playboy and Stately Wayne Manor in favor of the bat cave. Bruce Wayne becomes a character played occasionally by Batman. Batman is something new, he works for a greater good. (Okay, maybe that was a lame example.) 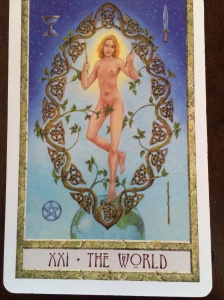 The World marks the end of the journey. This card is represented as a young nude, usually an amalgamation of male and female. This symbolizes mastery over those traits that are considered either male or female. The work ethic of the magician and the imagination of the high priestess. The nude is surrounded by four distinct items. Sometimes they represent the elements, sometimes the major zodiac constellations, in this case the four tarot suits. The symbols denote mastery over all these distinct items.
The fool is perfect now. Words associated with the world are: fulfillment, success, mastery, and accomplishment.
As an example, the best I can come up with is Peter Sellers walking on water in the ending scene of Being There.
I know my examples are lame, folks. This end of the deck is a little more high brow than where I prefer to spend my time.
***
Assessment:
As a plot structure, I think The Fool’s Journey works. There are others out there that might be better.
The first half dozen or so cards are useful for developing a character and giving him an environment to operate in. There are several wonderful opportunities to knock him on his ass and give him something to overcome.
For me, The Fool’s Journey starts too soon and ends too late for a novel. I can see where many novels will fit within a narrower version of these cards though.
Many times, I find inspiration in art. There are bits and pieces from this deck in some of my stories.
As a writer, I’m just as likely to snitch a piece of my story from fairy tale structure, add a bit of the hero’s journey, knead it into a three act format, and sprinkle with a dash of tarot cards. I bake it all up at an imaginary place I call the writing cabin.
You have to do what works for you. It never hurts to have another tool in your kit.